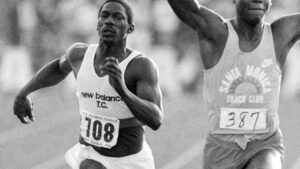 Emmit King, a two-time Olympian and former college track star, died on Sunday after an argument with an apparent acquaintance.

According to the Associated Press, King, 62, and 60-year-old Willie Albert Wells were arguing in a home outside of Bessemer, AL. The altercation escalated to a point where both men pulled out handguns and opened fire.

Wells died on the scene while King was transported to a nearby hospital, where he died later that evening. The Jefferson County Coroner’s Office released the men’s identities on Monday morning. Authorities say they knew each other.

It’s unclear if either man lived in the home, but per AL.com, King went to high school just a few minutes away from Bessemer.

While he never ran in the Olympics, King made the 1984 and 1988 U.S. Track & Field teams and qualified for the 4x100m relay team both times. King did compete and medal on the international stage however.

Yahoo! Sports reports that the year before his first shot at the Olympics, King had competed in the very first World Athletics Competition, taking home bronze in the 100m. The US swept the category, with Carl Lewis taking home gold and Calvin Smith coming in second.

King, Lewis and Smith also took home gold in the 4x100m relay at the same competition in Helsinki, with Willie Gault being the forth member of their relay team.

Earlier that year, King won the NCAA 100m championship while running for the University of Alabama. He had previously competed for Jefferson State Community College and Hueytown High School.

King’s last recorded career milestone came at the 1988 USA Outdoor Track and Field Championship in Tampa, where he ran the 100m in 10.04 seconds, his personal best.

Authorities did not have any details about the nature of the dispute that left both King and Wells dead. Despite both men having succumbed to their gunshot wounds, the incident is still under investigation.