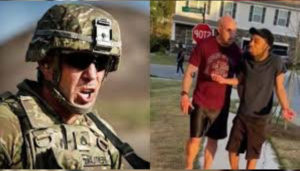 The Fort Jackson Army soldier who went viral after harassing a Black man in Columbia, South Carolina, has been found guilty of assault.

In April, Pentland went viral for all the wrong reasons after he was filmed shoving 22-year-old Deandre Williams, whom he questioned for being in his neighborhood.

“You’re in the wrong neighborhood,” Pentland shouted at the teen. Pentland claimed he was trying to protect his family from a man who was acting strangely. But Williams could be seen trying to walk away from the violent encounter.

“As a young man, if I go on a walk, I shouldn’t feel any form of pressure,” Williams said.

Prosecutor Paul Walton called out Pentland, saying he broke the law three times, first by shoving Williams before the video started, pushing him a second time when Williams took a step toward Pentland’s wife, and third by slapping Williams’ phone out of his hand.

“His pride is hurt,” Walton said of Pentland. “He’s a drill sergeant and he’s used to people doing what he says.”

During his testimony, Pentland apologized for his actions and revealed the “thousands” of death threats he’s received following the attack.

“It’s embarrassing to the community,” Pentland testified. “I’m sorry for the way it escalated. Anybody looking back at this, you can watch that video and 100% see that it looks worse than it is. I did what I felt I had to do to protect my friends and family.”