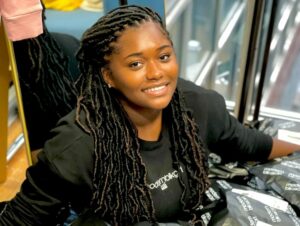 Tiffany James has first-hand knowledge about how to make $1 million in the stock market. Now, she is using that acumen to help other Black women build wealth.

She was working in the fashion and hospitality industries in New York City when she initially started investing in 2019, Insider reports. A co-worker was a “Tesla bull,” an investor who believes in Tesla’s aggressive growth in the future, who kept nudging her to buy Tesla shares.

At the time, she had a small portfolio that she started in 2016 that was flourishing, yet she didn’t pay much attention to it. She gambled and invested in Tesla in late 2019 when shares were $65 to $70 each. She started gradually investing $4,000, growing into six-figure gains as the Tesla shares were $1,000 each.

Since 2019, James has invested $10,000 in the stock market, finessing trades, long-term LEAPs, securities, options, and futures into a million-dollar portfolio in two years. The 26-year-old investor and financial coach is beefing-up efforts to teach Black women all she knows about stocks with Modern Blk Girl MBG.

Her timing is perhaps fitting. While  more people are investing in the stock market, a CNBC study reveals that 59% of Black women and 48% of Hispanic women don’t own individual stocks, mutual funds, bonds, cryptocurrency, or real estate, versus 34% of white women and 23% of white men.

Here is a breakdown of four strategies James used to build wealth rapidly.

1. Start with what you know

James diligently researched companies with “futuristic ideas based on her big gains in Telsa.” One she chose was Blink (BLNKW), the electric vehicle (EV) charging station firm. She invested conservatively and in safe areas like the S&P 500 (SPY), which tracks the performance of the top 500 U.S. listed companies. Roughly 60% of her portfolio is invested in safe growth. James also chose makeup retailer ULTA, given her background. “It was a smaller stock, but ULTA “did my account some justice,” she reported.

2. Kill the myth that you have to have a ton of money to start investing

After learning from friends that spent $4,000-$5,000 on leisure each year, James offered them this insight “Let’s say you take even 20% of that and invest it in the market,” she says. “You’re looking at really big gains.”

James shared a challenge with her growing community of fellow Black women investors on the audio-based social media app Clubhouse. She wanted to grow $2,000 into $250,000, using trades, long-term LEAPs, and options and met her goal in just seven months. “When you put it in that perspective,” James says, “people will start to think, ‘Oh, I can do that!’”

3. Listen to investing stories and advice from people you relate to

James says don’t be afraid to listen to people—other investors—who speak the same language as you, with experiences that you can relate to. For instance, affluent white men who come from wealth might not be able to connect to a regular person wanting to invest in stocks.

Further, James is confident that the stock market was geared to seem “scary or unattainable,” especially for Black women and people of color. “Once people realize you don’t need to get fancy degrees to learn how to make a trillion dollars from the stock market, the (finance space) could start looking really different,” she says. “This is why stepping into the market loudly, as people of color, is so important.”

A critical factor to success is joining a community of people with like-minded values. Take James, for instance. A daughter of Jamaican and Haitian immigrants, she had difficulty staying accountable and motivated until she found a community of Black creatives who were just as elated about the stock market.

Being generous with her money helps her stay motivated to keep investing, too. “When you learn about the market, your attitude toward money is that you can always get it back. I don’t really think about money as much because I know I can always get it. That’s the kind of flexibility I want for every Black woman.”