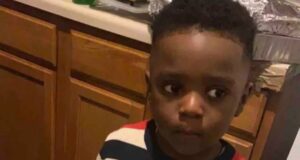 A 4-year-old boy has died after accidentally shooting himself in the face in the East Liberty section of Pittsburgh.

Ajani Lane was inside a home on North Negley Avenue with one guardian when the shooting happened around 8:15 on Monday morning, CBS Pittsburgh reported. Investigators believe the boy somehow got his hands on the gun, and it went off.

“This was a devastating tragedy. We believe it was an accident. A 4-year-old boy got a hold of a gun and shot himself in the face,” said Pittsburgh police spokesperson Cara Cruz.

Ajani was home with one grandparent at the time of the shooting. Following the tragedy, yellow tape circled the home along with toys along the front porch.

BREAKING: 4 yr little boy shot in the face taken to Children’s Hospital in critical condition died. Pittsburgh police going in and out of this duplex in the 500 block of N Negley Ave near Black St. About 2 miles away from Children’s Hospital. @WPXI pic.twitter.com/T8Isx9LlS9

“Medics were there immediately,” said Cruz. “It was literally minutes after this happened and they transported the child to Children’s Hospital in extremely critical condition and very sadly he passed away a short time later.”

In critical condition, Ajani was rushed to a nearby Children’s Hospital but died a short time later, WPXI reported. Police will determine if any other adults should be charged with the child’s death.

My heart just goes out to that family,” said Ella Rawlings of Pittsburgh. “It’s so devastating around the holidays to lose a family member period. Let alone a child that is four years old.”

Ajani’s’ death came hours before another child died after police said a 6-year-old shot a 5-year-old in the Penn Hills section of Pittsburgh.

“This issue of unintentional shootings among children has long been a problem and it remains a big one. It happens a lot more than you might think actually,” said Josh Fleitman with CeaseFirePA.

Fleitman is urging gun owners to use these tragic cases as a reminder to keep firearms out of reach from children.

“Sometimes they think simply hiding it in a cabinet, putting it on a bookshelf, is sufficient in getting it out of the kid’s reach, but there have been studies that show kids, they’re always watching and they know a lot of the time,” Fleitman said. “Seventy-three percent of cases in kids under 10 know where the parent stores their firearms.”