American firm Frederick Fisher and Partners has completed a trio of hilltop buildings for a California school that was partly destroyed by a wildfire.

The project was designed in the wake of the December 2017 Thomas Fire, which devastated the region and wiped out two buildings on the upper campus of the school.

Founded in 1911, the Ojai Valley School (OVS) is an independent boarding school that serves kindergarteners through 12th graders. In addition to its upper campus for high school students, it has a lower campus near downtown Ojai for younger pupils.

Frederick Fisher and Partners, which has offices in LA and New York, began working with the school in 2015 to devise a master plan for future growth. When the fire struck, the project shifted in scope.

“We reset from our previous planning with the OVS community and seized this rare ‘blank canvas’ opportunity to create a functionally and aesthetically unified, state-of-the-art learning, living and gathering village,” said Frederick Fisher, founding partner and design principal.

Set on a hilltop, the buildings are interspersed with walkways and gardens. Views of the surrounding terrain are ever-present.

The school has a focus on outdoor education, which led the team to ensure a strong connection between inside and out.

“In this aspect, all structures are organised around an identity that emphasises the scenic surroundings as the primary active element,” the studio said.

The buildings’ structural systems are made mostly of wood, with some steel columns and beams. Exterior walls are sheathed in light grey stucco – a finish that is part of the fireproofing strategy, which was formulated in accordance with the county’s strictest guidelines.

“The project embraces the scenic landscape while reflecting the kids of resiliency practices necessary to responsibly inhabit the area,” the team said.

The science building is one level and offers classrooms, laboratories and maker spaces. The two-storey student commons building holds a dining hall, student centre and library. 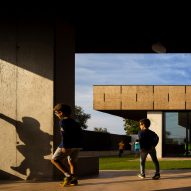 The third building, the dormitory, contains living spaces for both students and faculty and is arranged around a courtyard.

The project has a number of sustainable elements, including passive cooling, photovoltaic power generation and a lithium-ion battery system for storing energy. The campus can operate off-grid when needed.

The project is expected to achieve LEED Gold certification from the US Green Building Council, according to Frederick Fisher and Partners.

Founded in 1980, the firm has completed a wide range of buildings in the US and beyond, including a residence in California’s Santa Ynez Valley that is organised around a central courtyard and clad in weathering steel.

The photography is by Tim Street-Porter, Logan Hall and Breadtruck Films.