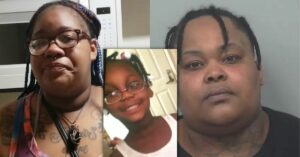 A mother in Gwinnet county is in police custody along with her spouse after the couple reported an 8-year-old missing who was later found dead.

It was Hall who told police where Amari might be. Her body was found Tuesday morning in a wooded area about 15 miles from the hotel where the family was living. The mother had been living at the Hometown Studios with her three children and partner.

She called the police around 9:15 a.m. Sunday to report Amari missing. Hall claimed Amari was last seen between midnight and 1 a.m. Sunday and said she was worried because Amari had autism and was new to the area. Following a thorough investigation, authorities determined that Amari was never missing and her own mother appeared suspicious.

“I can’t speculate on why they reported her as missing,” McClure added. “But our investigation revealed Amari was not, in fact, missing. Very early in the investigation, we began to suspect foul play.”

Brittany Hall and her partner have both been arrested and charged, 11 Alive reports. Hall was charged with making false statements, false report of a crime and five counts of first-degree cruelty to children. She is also expected to be charged with concealing a death.