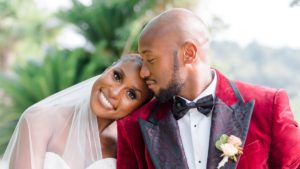 Issa Rae’s life as a single woman officially came to an end.

An Instagram post penned by Rae confirmed that the “Insecure” television creator and star made a stunning bride who wore a Vera Wang dress in the South of France. Our collective best friend in our head shocked fans when she showed up and showed out on social media looking like the “Queeeeen to be,” dazzling and regal and playing on our hearts and emotions with her social media marriage announcement saying:

“A) Impromptu photo shoot in a custom @verawang dress.

Big thanks to @whiteedenweddings for being so gracious and accommodating and making this feel so real and special,”  Rae posted on Instagram.

All jokes aside, the girl is married now!

“@IssaRae You look ethereal! Wishing you and Louis continued happiness and joy in your new life together ? ? XX Vera ? ? ?” Vera Wang posted.

When Rae posted a photo of her mate on her own Instagram account, she referred to him as “Somebody’s Husband,” while keeping the details to herself.  However, @laurenfair dropped a husband name clue in a congratulatory post.

“Congratulations beautiful @issarae & Louis! It was a joy and privilege to photograph your stunning wedding day in the French Riviera this weekend – it was a day full of so much laughter. You two are truly the sweetest couple! Thank you to the amazing team who brought the day to life:

Rae has been rather private about her love life, but one person may have spilled a little tea several years ago. Louis Diame was named as Rae’s fiancé in 2019 by the star’s brother— Lamine “Enimal” Diop, according to US Weekly.

“He’s just a good guy, man. He’s just a cool guy,” Diop reportedly told Us Weekly. “They’ve been dating forever. He’s already been like a brother to me. Family ties at all the family events and dinners, Christmas, Thanksgiving.”

Diop also stated that lack of time did not allow for an engagement function at that time, but “we’re just going to celebrate once it’s time for the ceremony,” according to the interview.

Pros and Cons of Working From Home: Is It Better for You and Your Wallet?