A cave-like cork lounge is hidden at the back of this barbershop in southwest Houston, by Gin Design Group, which also offers IV drips to cure customers’ hangovers.

Part of the Southside Commons development, the 2,697-square-foot (250-square-metre) space was designed to echo the first outpost in Houston Heights, but have its own distinctive character.

The history of this area, as a once “meager” and overlooked suburb that slowly became a thriving community, guided some aspects of the design.

“Taking cues from the cultural fibre of Southside Place, Treadwell’s second location will allude to the industrious nature of the area through the use of more industrial touches like steel and concrete,” said Gin Design Group, which is led by founder Gin Braverman.

“While these materials speak to the strength of the community, they’re softened by clean mosaic tiles, wood, and woven rattan,” the team continued. “Paired with organic architectural elements, this diverse blend of materiality helps to create an illustrious, yet comforting, medley.”

Customers are greeted at a reception desk fronted by square white tiles, which match the walls behind.

They then proceed to the “cutting floor”, which has a unique radial layout. Six identical chairs face outward at lozenge-shaped mirrors suspended in the middle of white metal poles.

A central circular unit forms a stand and incorporates storage for the stylists’ equipment. It wraps a wooden column, from which matching ceiling beams radiate like wheel spokes.

Tucked away at the back of the salon is an area lined entirely in cork, which features a curved bar made from glass bricks. 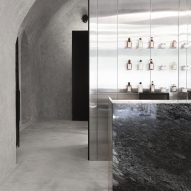 The dark and moody lounge is completed with turquoise bar stools and custom 1970s-influenced furniture, “speaking to the history of the mid-century architectural style of Southside Place”, according to Gin Design Group.

Other brighter rooms where the white mosaic tiles are continued include a hair-washing space, and another reserved for treatments including cryotherapy, pedicures, and IV drips intended to rehydrate the body and help alleviate hangovers.

“Bridging minimalist materiality with optimal functionality, Treadwell will remain a clear expression of innovation for the men’s grooming industry.”

Other unusual, design-forward barbershops around the world include a minimalist space by Ivy Studio in Montreal, a “brooding” men’s spa by Nicholas Szczepaniak Architects in Dubai, and a salon with greyscale interiors by Sivak & Partners in Odessa.

The photography is by Cladia Casbarian for Julie Soefer Photography.

Bank of Thailand to allow first virtual banks by 2025