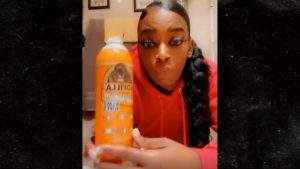 Tessica Brown’s 15 minutes of fame has been extended yet again!

Brown is affectionately known as “Gorilla Glue Girl” because of a hair mishap that went viral following a video she posted on TikTok and Instagram revealing that she used Gorilla Glue to lay down her hair after running out of hair spray. She stated in the video that her hair had been stuck in place for a month,  and then she had successful surgery that removed the toxic adhesive.

According to Radar Online, she is back in the news again due to her ex-fiancé violating a restraining order she had against him. Dewitt Madison, 38, is detained in Violet, Louisiana, after allegedly violating Brown’s restraining order.

Madison phoned Brown although he knew the protective order had been in place for several weeks, and when she did not answer, Dewitt appeared at her home and then proceeded to knock on the windows.

After Brown notified the police, Madison fled the home only to return around 3 AM, where he was arrested and taken into custody at St. Bernard Parish Jail. Brown initially requested an order of protection from her ex-boyfriend last month on July 2, after she had already filed a police report accusing him of stealing some television sets from her home.

The latest adventure for the viral sensation has her hocking Sleek edge control that will safely help customers lay their edges down with ease. According to its website, the product is made with black castor oil and aloe vera and will be released soon. Another product called growth oil promises to stimulate hair growth. Another product, Forever Hold, is also offered for sale. Additionally, sweats with ‘Bonded For Life’ lettered on them, t-shirts, and hoodies are all for sale.