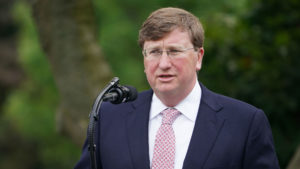 Mississippi Governor Tate Reeves (R) said Southerners are a “little less scared” of COVID-19 because they “believe in eternal life.”

“I’m often asked by some of my friends on the other side of the aisle about Covid…and why does it seem like folks in Mississippi and maybe in the Mid-South are a little less scared, shall we say,” Reeves told the crowd at a Republican Party fundraiser Thursday, according to the Daily Memphian.

While Reeves and Southerners may not take COVID-19 seriously, the coronavirus is feeding on the state.

On Friday, the Magnolia state passed New York City in COVID deaths per capita last weekend making it second to only New Jersey. According to the Mississippi Free Press, Reeves’ comments came days after the state had been considered the global hotspot for new cases and a day after a child became the state’s sixth to die from the virus. Making things worse, the state has less than 45% of residents have had at least one dose of the vaccine.

Reeves implemented a statewide mask mandate for schools last year, but has resisted doing so this year. The governor did say people should protect themselves, but only because God said so.

“Now, God also tells us to take necessary precautions,” the governor said. “And we all have opportunities and abilities to do that and we should all do that. I encourage everyone to do so. But the reality is that working together, we can get beyond this. We can move forward. We can move on.”

Mississippi isn’t the only state dealing with a significant rise in COVID-19 cases and deaths, while state leadership continues to ignore the situation.

Hospitals in the state of Florida are ordering mobile morgues to deal with the high death count because the state’s morgues have reached full capacity. AdventHealth, a Florida non-profit healthcare system that operates facilities across the United States, ordered 14 portable morgues to account for 168 additional bodies

Despite that, Governor Ron DeSantis promised to punish school districts that try to implement mask mandates, but many have defied his orders and state courts are doing the same.