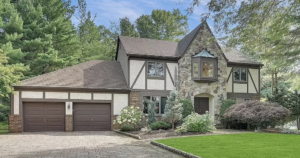 Transracial activist Shaun King is moving on up. The controversial “advocate” has left the hustle and bustle of New York and moved to his new luxury home in New Jersey.

According to the Daily Mail, the lavish five-bedroom, four-bathroom home that sits on Farrington Lake came with a hefty price tag of $842,000. The news outlet reported that King bought the house last November.

The stately abode’s purchase comes when King has been accused of grifting Black folks in the fight for social justice, stealing money, lying about his racial identity and abusing Black women.

In 2019, a lengthy exposé by the Daily Beast revealed a long, salacious history of money disappearing or not being accounted for in various efforts, including Haiti and Black Lives Matter.

The publication came back with more receipts of King’s sinister and shady behavior in 2020.

Imani Grandy broke down the now-defunct hustle of King’s North Star media project on a Twitter thread. The project promised to be the second coming for Black media. King didn’t deliver there either.

If we are doing day 2 of “wtf Shaun King,” let’s talk about North Star.

His website suggests that he’s close to 50K members. At 10 bucks a month for membership, that’s a half million dollars a month—

For what? A blog? Where’s the original reporting? The podcasts? Video content?

Tamir Rice’s mom, Samaria, didn’t mince words when she called King a “clout chaser” after raising $60,000 in honor of her son. The still-grieving mother lambasted the wayward activist stating that she didn’t receive the money until a court intervened on her behalf. She also didn’t permit him to raise money on her family’s behalf.

In July, King came under fire on social media after he said he was taking a sabbatical from social media. He deleted his Twitter account and made his Instagram private. The sabbatical didn’t stop the hustler from soliciting donations for his wife for no reason at all.

Scumbag #ShaunKing lives in a million dollar home bought with your donations.

Currently on a 4 week family vacation 100% funded by your donations – hotels, travel, food, activities – you’re paying for it all.

In that same month, screenshots emerged of King allegedly leveling up his beggar’s act globally. King’s Facebook status reportedly targeted his followers and fans in the Caribbean and Canada.

Y’ALL! Ain’t Shaun King supposed to be on hiatus from social media?? Ahora, el se va pa’ Caribe y Canadá? How is ANYBODY in 2021 still drinking this flavorless Kool-Aid? Bruuuuuh! Ain’t nobody buying the “I’m my Daddy is Black” schpiel either. He is aging like an ?. pic.twitter.com/Q8RZfk6DcP

With the news of King’s palatial purchase hitting the news, Twitter users are yet– again raising valid questions about his finances.

I like how two weeks ago Shaun King was begging for money for his wife to “alleviate pressure,” but now it’s reported she bought a 5 bedroom house in Jersey. Lol

Why did Shaun King purchase his $800k lakefront home solely in his wife’s name? ?

Shaun King lives in a house that costs over $800k that was signed in his wife’s name.

He had the audacity a few weeks ago to ask his followers to Cash App her money.

When we say “grift,” this is exactly what the fuck we mean.

Anyone who still chooses to support deserves it.

How is it all of these socialists, like Shaun King and the BLM leaders, are living rich as their poor followers give them donations. https://t.co/7IJmhqWVaL

Shaun King is qualified to lead BLM at the executive level now that Patrisse Khan-Cullors has stepped down.

What do they both have in common?

They got rich pretending to care about blacks, only to go drop tons of cash on luxury properties in predominantly white neighborhoods. https://t.co/yS3fBHAekR

King has yet to respond.