The governor of Illinois has decided to retain the under-threat James R Thompson Center in Chicago, which was designed by architect Helmut Jahn, with his former studio set to carry out its renovation.

Governor Jay Robert Pritzker announced that the offices of the Illinois state government will be sold to developer Prime Group, which will retain the structure.

The news follows years of speculation over the fate of the postmodern icon, after plans to sell the building were first made public in 2015.

The 17-storey building was put on sale by the government in 2019 further fueling fears of demolition.

The building was designed by architect Jahn, who passed away earlier this year. It is set to be refurbished by the architect’s former studio, Jahn, into a mixed-use property.

The state will retain 30 per cent ownership of the building.

Originally called the State of Illinois Center, the postmodern building opened in 1985.

It was renamed in 1993 to honor governor James R Thompson who commissioned the structure. 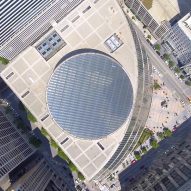 Distinguished by its curved glass facade and large central atrium it became a well-known landmark in the city.

Renders of the renovation show the building with a replaced glass facade, while its colourful interior atrium has been significantly toned down.

Its potential demolition was met with protests including a film made by Nathan Eddy, which was named Starship Chicago after the building’s nickname. Eddy welcomed the news of that the building will be retained.

“The preservation of Helmut Jahn’s masterpiece is an extraordinary development for this truly spectacular contribution to Chicago’s world-class architectural legacy,” Eddy told Dezeen.

“So many talented and dedicated people in the city and across the globe have worked tirelessly to champion this building and fiercely argue the case for its rehabilitation.”

Architect Jahn died earlier this year in a bicycle crash. Along with the Thompson Center he also designed United Airlines Terminal One at O’Hare airport in Chicago, which was his adopted home.

“The city has done Helmut proud,” added Eddy. “I only wish he – and Governor Thompson – were still here with us to share in the good news. Long live Starship Chicago!”

The imagery is courtesy of Jahn.