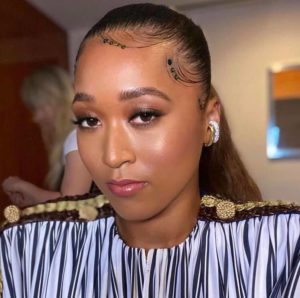 Tennis star Naomi Osaka is officially the highest-paid female athlete of 2021, according to Sportico.

The four-time Grand Slam champion has been ranked as the world’s highest-paid athlete for two consecutive years. In 2020, Osaka ranked at the top of the earnings scoreboard with $37 million (from June 2019 – June 2020). In May 2021, Sportico announced that she earned $55.2 million over the previous 12 months.

Forbes ranked the tennis pro No. 12 on the list of highest-paid athletes of 2021 with an estimated $60 million in total earnings. The 23-year-old is not only breaking earnings records for female athletes, but she’s racing ahead of popular male athletes as well. She’s listed above tennis star Novak Djokovic and tied with golf legend Tiger Woods for the No. 12 spot.

Osaka is a sports sensation. She gained notoriety in 2018 after claiming victory over Serena Williams in the U.S. Open. She became the first Japanese-born tennis player to win a Grand Slam championship.

Last year, Osaka won her third Grand Slam title at the U.S. Open. She was also named AP Female Athlete of the Year.

Despite Osaka’s remarkable success on the court, less than 10% of her earnings are derived from playing tennis. She’s accumulated multiple streams of income beyond her athletic performance that’s allowed her to soar to the top of the income charts.

How Osaka Earned Over $50 Million Beyond the Tennis Court

Forbes estimates that the majority of Osaka’s earnings (over 90%) comes from endorsements. She earned $55 million from a plethora of lucrative brand endorsements in 2020 and 2021. The 23-year-old brought home $5 million in tennis prize money in 12 months.

Osaka has landed deals with over 20 world-renowned companies. Earlier this year, Osaka signed a contract with Workday — a human resources technology company. To kick off her partnership, she wore the company’s logo on her dress at a curtain-raiser event in Australia.

“Wow this is actually crazy,” Osaka shared on Twitter. “Honored to be @LouisVuitton newest House Ambassador.”

She adds, “Funny story: I first bought my mom a LV bad when I was 16 as a birthday present. It’s kinda been a tradition since. Do I call this a full circle moment? Yes.”

Wow this is actually crazy. Honored to be @LouisVuitton newest House Ambassador.

Funny story : I first bought my mom a LV bag when I was 16 as a birthday present and it’s kinda been a tradition since. Do I call this a full circle moment? Yes ? pic.twitter.com/r2kV7OVNPy

“Aside from tennis, my most treasured passion is fashion, and there is no brand more iconic than Louis Vuitton,” the tennis pro told Vogue. “It is such an honor to work with Nicolas—he’s a designer I admire so much and we share a mutual love of Japanese culture and style. To become a global brand ambassador is truly a dream come true for me.”

Naomi has been an inspiration to women all over the world. It’s not a surprise that the Female Athlete of the Year landed an appearance in Levi’s Beauty of Becoming campaign earlier this year.

Sportico reports that Nike is Osaka’s biggest sponsor. She’s earning at least $10 million a year from this deal.

In 2019, Osaka signed a deal with Body Armour sports drinks that comes with equity interests. Forbes reported that Body Armour has a goal to overtake Gatorade and become the number one sports drink by 2025. Founder Mike Repole is best known for co-founding Glaceau smartwater, which was purchased by Coca-Cola in 2007 for $4.1 billion.

Osaka also has equity interests in Hyperice, a performance technology company that specialized in fitness devices. Patrick Mahomes, Chris Paul, and Osaka are just a few of the athletes who have invested in this company.

Sweetgreen selected Osaka as its first athlete ambassador. She’s also an investor in the restaurant chain.

Masahiro Sakurai Talks About The Beginnings Of Kid Icarus: Uprising