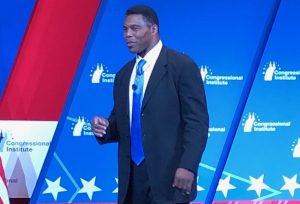 According to CNN, it’s been revealed that a third woman, who lived in Texas at the time, claimed that Walker threatened and stalked her back in 2002. The woman confirmed the report this week to the outlet but asked not to be identified.

According to the outlet, the woman was in her late 20s when she contacted the police about the alleged stalking claim. She did state that she had never dated or had any type of relationship with Walker.

The woman, a friend of Walker’s ex-wife, spoke to the police and stated that Walker had been following her and had previously made “threats to her” and had “her house watched.”

Walker recently announced that he is running for a Georgia Senate seat. After making the announcement, the former running back, a Black conservative who has fully supported Republicans and backed former President Donald Trump in last year’s presidential election, has been hit with several accusations against his character.

BLACK ENTERPRISE reported last week that in documents obtained by the Atlanta Journal-Constitution, a July 2012 police report revealed threats that Walker supposedly made to a now-deceased woman named Myka Dean. At the time, the woman claimed Walker threatened to “blow her head off” and then kill himself when she tried to end their romantic relationship.

As the claims resurface, Herschel’s camp works to discredit and dismiss them.

“It is sad that many in politics and the media who praised Herschel for his transparency over a decade ago are now making false statements, stereotyping, attacking, and attempting to sensationalize his past just because he is a Republican Senate candidate,” Mallory Blount, a campaign spokesperson said in a written statement.

On Thursday, Walker did respond to the allegations against him.

I’ve been in the race for barely a week and am already being attacked. We shouldn’t be surprised. I LOVE GEORGIA and this country too much to stay out of the fight!! https://t.co/eP4PlIhWUI

THANK YOU to my friend President Trump for your support and encouragement! Together, we will win back the U.S. Senate for GEORGIA!! ??????https://t.co/eP4PlIhWUI pic.twitter.com/9lI4SvaEkI

Building the Metaverse without bias