We got a solid glimpse at Horizon Forbidden West’s improved combat/exploration systems during Sony’s State of Play earlier this year. New gadgets and visual cues give Aloy an unprecedented level of freedom to maneuver around the open world as well as bring down humanoid and machine enemies. The second in a series of developer updates, a recent post on the Official PlayStation blog delves into how Horizon Forbidden West’s various mechanics emphasize player-choice like never before.

This time around, lead systems designer David McMullen and lead combat designer Dennis Zopfi have taken to the main stage to discuss what makes Forbidden West’s gameplay so deep and satisfying.

Now that Aloy can climb freely, swim underwater, glide with her Shieldwing, and grapple certain sections of terrain, movement is more streamlined and fluid. Of course, this design choice was not made lightly. McMullen states that Guerilla Games wanted to empower the player in nuanced ways:

“Our traversal design decisions were always in service of increasing dynamic interactivity with the world around you. This could be to empower the player to manipulate and destroy their environment with a tool like the Pullcaster; or grapple-launching into a glide with the Shieldwing to set yourself up for a strike from above. What excites us most is how our mechanics, new and old, synergistically interact with each other to provide varied and dynamic approaches to any scenario.”

Despite exploration’s newfound ease, Aloy will have to stay one step ahead of her adversaries while out and about. The inclusion of a workbench allows Aloy to strengthen weapons and outfits, which unlocks a bevy of perks, mods/mod slots, and skills. The skill tree has been redesigned to mesh with any abilities that might be linked to Aloy’s equipped gear. These features come together in flashy engagements as Aloy uses her melee and ranged capabilities to survive. 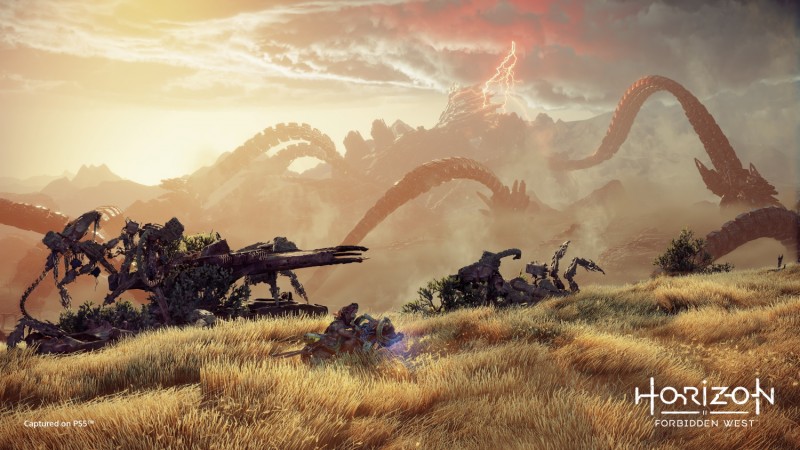 “The goal for the weapons in Horizon Forbidden West was to give each of them a stronger personality, which is also expressed in how you have to handle them,” Dennis explains. “Each weapon has their strengths and weaknesses in terms of the ideal situations to use them in. The Spike Thrower, for example, is a new, high damage weapon which, when thrown at the right moment, makes it easier to hit larger targets. For elemental damage, such as fire or adhesive, you can choose to stick with the Blast Sling, and so forth. Each weapon comes with different perks, ammo types, and weapon coil slots to customize them further — though some weapons need to be upgraded first before you can make them stronger.”

Add in Valor Surges – powerful abilities that drain your energy reserves – and you can tailor Aloy’s kit to match any playstyle.

What weapons or methods of exploration excite you the most in Horizon Forbidden West? Let us know in the comments!