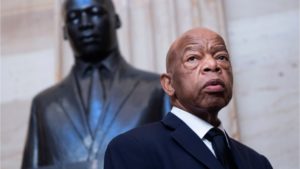 “Passing the John Lewis Voting Rights Advancement Act is of utmost importance. We’re in a five alarm fire, with Republican attacks continuing to escalate, and the promise of democracy is on the line,” said MoveOn Political Action Executive Director Rahna Epting. “Voters pick our leaders, and not the other way around. To deny this bill would be to deny the very foundation of democracy. The Senate must act now and pass the John Lewis Voting Rights Advancement Act to restore the Voting Rights Act, as well as the For the People Act and protect the freedom to vote for all Americans.”

As we commend the House for passing a voting rights bill which places value on the freedom to vote, we must be sure to note that the job is not finished. Democrats in the Senate must not let Republicans abuse the Jim Crow filibuster to block this urgently needed legislation.

“Ensuring that democracy works for and includes all Americans regardless of color, party, or zip code should not be a partisan issue,” MoveOn Political Action Executive Director Rahna Epting explained, “As the freedom to vote is being attacked by Republicans at the state level across the country, we need strong legislation to create national standards and accountability for those who try to rig the rules in their own favor.”

The Voting Rights Act has a long history of bipartisan support. In fact, every time the law has been reauthorized, it has been signed into law by a Republican president after first being signed into law by Democratic President Lyndon Johnson in 1965 at the peak of the Civil Rights movement. When it was reauthorized most recently in 2006, it passed the Senate with unanimous support, 98 to 0.

MoveOn is one of the largest independent progressive advocacy groups in the United States that mobilizes millions for a better society—one in which everyone can thrive. Whether through supporting candidates, passing legislation, or changing our national culture, MoveOn members are committed to mobilizing together for an inclusive and progressive future marked by equality, sustainability, and justice.