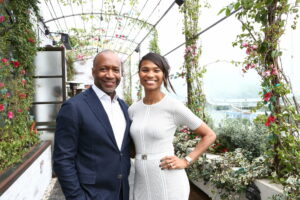 ABFF Founders Jeff Friday and his wife, Nicole Friday, each have a wealth of experience in the film and entertainment industry. After seeing very few Black people and content at the Sundance Film Festival one year, Friday decided to create a Black film festival. In 1997 he co-founded the Acapulco Black Film Festival.

He later acquired full rights to the festival, renamed it the American Black Film Festival, and moved it to Miami, but along with growing the festival, Friday has been paving his own path.

Throughout his career, Friday has worn many hats including television and film producer, festival trailblazer,  diversity advocate, and  mentor. In 2019, he formed Jeff Friday Media (JFM), a Los Angeles-based entertainment company producing film, television and digital content as well as events focused on Black and brown culture.

Friday discussed why he started the ABFF and how proud he and his wife are about where it is today.

“We feel great and very blessed that we had the vision and the fortitude to stick this out because 25 years ago Hollywood wasn’t committed to the type of diversity and equity we needed,” Friday told BLACK ENTERPRISE.

“Hollywood was not allowing African Americans to thrive and we just wanted to shine a light on that and be this place where people can be successful and be encouraged in spite of all the inequities that exist in Hollywood.

“We’re proud of the work we did, it wasn’t easy and two and a half decades later we’re still standing,” Friday added. “We’ve helped a lot of people along the way we’ve helped build business, make movies, set up production companies and we haven’t done it alone, we’ve only been successful because we’ve had some amazing partnerships.”

Nicole Friday has 20 years of experience in the entertainment industry as an executive, producer, writer, and media personality. Additionally, she serves as the president and general manager of ABFF Ventures working beside her husband Jeff.

The Howard University graduate got her start working for Ford Models, where she was part of the team that signed a young Boris Kodjoe. She also can throw down in the kitchen, having received formal training from the Institute of Culinary Education.

Nicole came on board with Jeff during the festival’s second year and has been with him through the ups and downs, working together in their careers and lives.

“We have different points of view, so it works,” said Nicole. “I think sometimes when you’ve been doing the same thing for a long time you can’t see outside of that box and I think I bring that outside of the box inside, so I think it helps us grow, helps us bring other growth opportunities to the table.

“As a married couple you know you always have each other’s backs and we both want the same thing, we want growth and success and to have a legacy.”

As the celebration for two and a half decades of their hard work continues throughout the month, the couple will look back on all they built, but they’re also excited about the future. And with today’s technology, even a worldwide pandemic can’t stop them.

“After 25 years we did a ‘where are we now’ and I would like our organization to continue to grow, meaning two things,” Jeff Friday said. “We have four events, centered around Black culture and achievement and in the next couple of years we’re going to expand those events into other areas of Black culture, so we’re going to expand what we do beyond the film and TV and we’re also looking to nurture young people and nurture future leaders.”