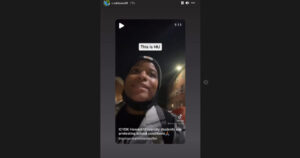 One of the most prestigious and well-known HBCUs is going through what is being labeled a “housing crisis.”

According to Howard University freshman, Chandler Robinson, fellow pupils have been exposed to mold and others hospitalized because they were coughing up blood and having breathing issues.

Robinson recorded herself speaking about the conditions of housing on the campus of the prestigious university and posted it to Instagram. The video was also posted on Twitter by @cocoapimpcess.

PLEASE SHARE! THIS IS WHAT IS HAPPENING AT HOWARD UNIVERSITY RIGHT NOW! pic.twitter.com/TfNtznwsLz

In the video, which has since gone viral, Robinson discusses the conditions that she and other students have had to endure. She describes some of the issues she’s encountered within her first two months at Howard.

She revealed that several of her friends have no place to stay and the property that she resides in has damage from mold exposure. Robinson also cautioned prospective students against applying based on the condition of the housing on campus.

She had also mentioned that some of her peers have been hospitalized because they were coughing up blood and had issues with breathing while occupying the residence at the school. Due to the unhealthy living conditions plus being unable to access wifi, she states that she is also five months behind in her studies.

The student protesters spent two days demanding university officials to agree to a town hall meeting by the end of the month to negotiate their demands, DCist/WAMU reports. It was students with the group Live Movement that kicked off the protest last week on Tuesday night. The group serves as a coalition of HBCU students who advocate for education reform at the schools.

Howard University students on campus have already stated that they are willing to stay in Blackburn Center for as long as it takes. The group has also said that they will disrupt Homecoming activities or potential donor opportunities if their demands are not met.