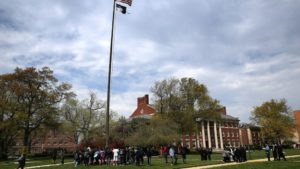 Howard University is anticipating a larger than usual freshman class after months of donations and exposure attributed to alumna and Vice President Kamala Harris.

However, the historically Black college and university (HBCU) is now facing a housing shortage due to its popularity. Howard, which had about 1,900 freshmen in 2019, is anticipating an incoming class of about 2,300 students this fall.

Last year, more than 2,200 freshmen were enrolled at the HBCU; however, the increase was easy to deal with due to remote learning.

This year, Howard is dealing with the return of in-person learning, more upperclassmen who want to live on campus, higher retention rates, and safety measures limiting campus housing to two students per room. Additionally, off-campus housing in Washington D.C. is so expensive that even politicians admit they can’t afford to live in the city.

“Everyone has just been scrambling,” Yasmine Grier, a junior, told the Washington Post. “The struggle has been pretty real.”

Freshman and sophomore students at Howard are given priority for housing, meaning many upperclassmen are forced to find housing in an already tough housing market. Howard students have begun using the hashtag #HomelessatHoward to raise awareness of housing issues and deteriorating facilities.

Jomi Ward, a junior who faced her own housing issues when she was a freshman, created a group chat for struggling students. There are more than 250 members in the group who share listings, resources and search for roommates. Additionally, Howard alumni have opened their homes to students.

Howard is aware of the problem and posts housing information on its site, and social media feeds such as apartment listings and FAQs. The school also has secured additional off-campus housing, including at the University of Maryland, raising the school’s housing capacity to more than 5,500 students.

Howard isn’t the only college struggling to house its students. According to Forbes, more than 200 students at Dartmouth College are on a waitlist for housing. The University of Tampa, where on-campus living is not required, and student housing is not guaranteed, has seen a huge demand for on-campus housing.

Other schools also dealing with housing issues include Emerson College in Boston, the College of Idaho, Southern Utah University, The University of California, San Diego, and Loyola University New Orleans.