We were not given early access to review Riders Republic, Ubisoft’s new open-world action sports game. So, while you wait for our full review, here are some thoughts on the game after nearly a dozen hours. We hope to release a formal review sometime next week.

I think the best way to describe Riders Republic is to tell you about its soundtrack. Specifically, two songs prominently featured and played ad nauseam over almost every single race and objective.

The first song is “All I Want” off The Offspring’s 1997 album Ixnay on the Hombre. If the name doesn’t immediately ring a bell, it’s perhaps best known as the song in Crazy Taxi. You know, the “Yeah, yeah, yeah, yeah, yeah” song. That one.

The second is a cover of Coolio’s landmark 1996 song “Gangsta’s Paradise,” softly performed by Les Ukulélés Girls, featuring the artist Zita. Replacing the original’s bass and drums of the original, and the almost icy and cold keyboard lead that rests over them, is the light strumming of a ukulele as a woman creates her own melodies, assuring you that she is, in fact, “a loc’d out gangsta, set trippin’ banger.” Actually, before we continue, I think you need to hear this one yourself. It is truly one of the worst things I have ever heard in my entire life.

I bring these two songs up because I think they fully encapsulate everything wrong with Riders Republic. “All I Want” is iconic for a reason. Its inclusion in Crazy Taxi for the Dreamcast came at a pivotal time for open-world game design. Though we largely see the Sega Dreamcast as a failure these days, Sega’s console was full of fascinating and unique games. Yes, they were commercial products released by a giant company, but games like Jet Set Radio and Crazy Taxi spoke to an entirely new audience of teenagers and young adults because they were made by people who understood and lived in that youth culture themselves. The inclusion of a song like “All I Want” in Crazy Taxi was iconic because it spoke to the audience of the time. It was cool and unique for a band like The Offspring to show up in a video game, especially one like Crazy Taxi.

I don’t want to speak out of turn, but I think “Gangsta’s Paradise” has a similar position within pop culture. It speaks to a specific time and place in Coolio’s life and is meant to resonate with people who relate to its lyrics. Distilling the emotion of that original song to a poorly sung and butchered ukulele cover destroys what makes the original special in the first place.

As does taking a song popularized by another game, Crazy Taxi, and putting it in your big-budget action sports title. It doesn’t take a genius to see what Ubisoft’s doing – trying to cash in on specific and important cultural milestones in its own commodified way. Mind you, there are four songs by The Offspring in this game. Four. In 2021. On top of two songs from Green Day’s most recent album, Father of All… You know, that Green Day album everyone knows and loves.

Who, exactly, is this game for? 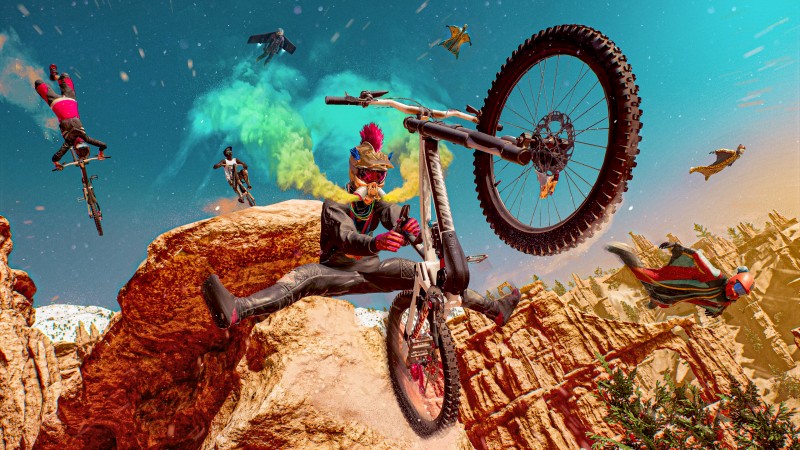 Riders Republic is desperate to make you think it’s cool. At all times. It constantly throws slang at you that no one outside of Ubisoft’s writers’ room has said in the last 20 years. Constant banter about breaking out “a whole new level of steeze,” whatever the hell that means, all said without a shred of self-awareness or irony. Repeated over and over in unskippable dialogue prompts that play every time you scroll over a certain part of the game’s map or while out traversing the world. It wasn’t cool the first time; it’s unbearably insufferable the 12th time. I fear what I may do when I finally hear it for the 100th time.

This is the same problem with the game’s soundtrack. The bulk of this game is racing, and every time you load into one, there is, by my estimation, an 80-percent chance one of the songs by The Offspring or that Coolio cover will play. There is an in-game radio with different genres and stations, but once you enter a big race, the game has a predetermined soundtrack. Play a dozen races and there’s a really good chance you’re going to listen to the same three songs a dozen times. One time, while working my way through a race, “All I Want” played twice in a row. I considered throwing my PlayStation 5 off a cliff.

What bothers me so much about Riders Republic is that underneath its insincere attempt at being cool and edgy is a fantastic racing game. Riders Republic’s massive open world, based on a large handful of the United States’ actual parks – such as Mammoth and Yosemite – is fantastic, massive, and ever-changing. Blistering down a snowy mountain on my snowboard before launching off a ramp, high into the air, changing into my wingsuit, which I use to glide back down to earth, switching to my mountain bike at the very last second to finish my journey back down to sea level, is constantly exhilarating – especially if you play in first-person, which makes everything feel faster than humanly possible.

The races are all fun – music notwithstanding. Barreling down a course against up to 63 other players, as you bash against your opponents, trying desperately to outmaneuver them and not ride off the side of a sheer cliff wall is hilarious, challenging, and invigorating.

Testing my skills with various sports is a standout. Multi-sport races force you to switch from bikes to wingsuits, skis, and more, whether you’re ready or not. This is a great way to test players, to make them use all of Riders Republic’s mechanics. And when you’re able to pull off a complex, lengthy race it rewards you with an immense sense of satisfaction. 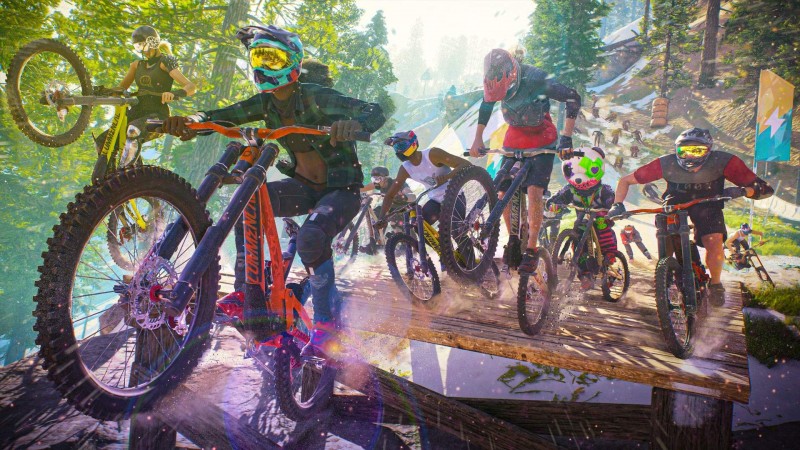 Engaging with Riders Republic’s good parts means also engaging with heaps of things that I find insufferable. And that’s really unfortunate. Because the things I like in Riders Republic, I really like. Hell, I love them. But the things I hate get under my skin in a way few games do. I really want to like this game, but this game seems hellbent on not letting that happen.

To be fair, at this point, most action sports have been commercialized and corporatized beyond the point of recognition. But still, forcing myself to play hour after hour of Riders Republic, I can’t get over how gross the whole thing feels. The racing is great, but everything else feels like the developers took a look at a world they didn’t care enough to actually understand and then tried to replicate it without any knowledge of how to relate to its ostensible audience or the people they were imitating in the first place. It’s a culture vulture in video game form. The writing and the music are all examples of the various ways Riders Republic just doesn’t get it.

Riders Republic wants you to think it’s cool, that it knows what’s cool and that it’s going to give you a crash course on how to be cool. But I think even the lamest person on Earth would see through its veneer. Common sense should dictate that a collection of The Offspring’s songs in 2021 is not, “a whole new level of steeze.” Neither are all the actual sponsorships in the game from companies like Ford. Absolutely nothing is more punk rock than an F150, right? The atmosphere is obnoxious and vapid. I don’t know if fun racing mechanics can fix that.