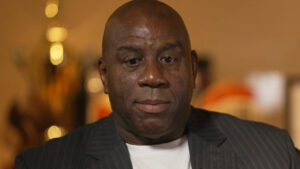 Amidst the COVID vaccination controversy surrounding athletes like Brooklyn Nets basketball player, Kyrie Irving, although 96% of the players are vaccinated, there are still some athletes who are holding out.

The retired Hall of Famer has been very vocal about advocating for others to get vaccinated against COVID-19. Before the start of the 75th anniversary of the NBA, the outspoken businessman spoke to CBS News about his thoughts on players who are not vaccinated letting their teammates down.

Johnson spoke about the influence of basketball players because people look up to them. He focused on the importance of the popular athletes being an example to the community, obtaining their vaccination shots because people listen to them and follow their lead. Also, the fact that members of a player’s team are relying on them to help them throughout the season.

“You have said to your teammates ‘I’m gonna be there for you’ well, you can’t be there if you don’t get vaccinated,” Johnson said. “You letting them down and then that hurts our chances of winning a championship, I would never do that to my teammates. Never.”

For it to be only 4% of current NBA players unvaccinated, all the attention about not being vaccinated seems to be towards Irving. Last week, the mercurial player appeared on Instagram Live to talk about his reasoning to stick to his decision regarding his vaccination status, saying he chooses “to be unvaccinated.”

According to ESPN, Irving spoke out about the consequences associated with him not getting a coronavirus vaccination and how it’s about his life.

Although Irving will not lose any money from games played on the road, with the two games played at Madison Square Garden, the lone game versus the Golden State Warriors, and the 41 home games he will miss at Barclays Center this season, he stands to lose over $17 million, according to ESPN’s Bobby Marks and Tim Bontemps.

Everyone Has Fainted In Pokémon's Next Merchandise Range