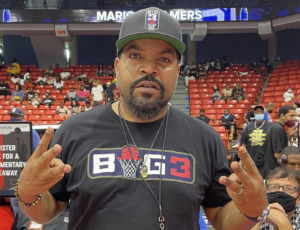 According to The Hollywood Reporter (THR), the Friday star reportedly curbed producers of Sony’s forthcoming comedy, Oh Hell No, when they requested that he get vaccinated. The 52-year-old entertainer forewent his role in the film over the ask.

Although none of the parties involved commented on his departure, the film has been plagued with another setback since its inception. The other film’s co-star Jack Black, who also serves as one of the movie’s producers, was hurt in June while he shot a gag for the final episode of Conan.

Sony is searching for a replacement for Cube, but it’s uncertain if the $9 million bag will be given to the new cast member.

Even though Cube declined the vax, he has been vocal about wearing masks. THR reported that the former NWA frontman forged a donation drive of 2,000 masks in August. He also created a line of tees to encourage mask-wearing during the first part of the pandemic. The “Check Yo Self Before You Wreck Yo Self” t-shirts were in partnership with Black Out and proceeds went to help frontline healthcare employees.

Reactions to Cube’s decision to drop out varied on social media. More folks seemed to think he was foolish for not getting the vaccine.

How you gonna lose $9,000,000 for refusing to vaccinate WHILE your Mama in law is in the hospital possibly dying from COVID-19??? ( I know his brother in law)https://t.co/c0EVDz5xwx

Another super rich person turning down millions, simply because they were required to get the vaccine, and opted not to. Ice Cube, and Kyrie Irving, both have their right to choose, just don’t expect me to hop on the *thoughts & prayers* train, if and when shit goes down.

The thing about the Ice Cube situation is that he can afford to say “no” to $9 million over a vaccine requirement, but most Black folks cannot afford to lose their jobs. Our communities have been disproportionately impacted by COVID-19 both health wise and economically.

The few people who did support the rapper commended his bravery for taking a stand.

Ice Cube is a real man & a real American.

Oh hell yes! His body his choice. #RISE Drops Out Of Upcoming Film ‘Oh Hell No’ After Declining COVID-1… https://t.co/lKiKqI5WG0 via @YouTube

Ice cube one of the realest niggas ever, salute!! https://t.co/733Jn9YSMO

Vaccinations for cast and crew members on Hollywood sets have been a hot-button issue since Tinseltown started making projects again. In July, the Alliance of Motion Picture and Television Producers (AMPTP) and the industry’s top guilds — including SAG-AFTRA, IATSE, the DGA and the Teamster announced guidelines to keep stars and crew safe on the set. A vote determined that producers could require participants, including actors, to be fully vaccinated in order to work on a project.

Given Cube’s net worth of $160 million, he can afford to decide if he wants to work or not.