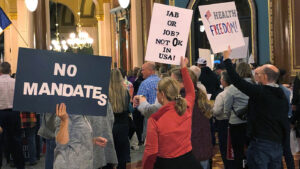 Under a bill Iowa legislators approved Thursday, state employees can seek religious and medical exemptions from COVID-19 vaccine mandates, and those fired for refusing the vaccine would be guaranteed unemployment benefits.

NPR reports Iowa Gov. Kim Reynolds has called for legislative action concerning vaccine mandates as she has opposed mask mandates and vaccines, although more than 7,000 residents have died from COVID-19.

Reynolds announced she intends to sign the bill, calling it “a major step forward in protecting Iowans’ freedoms and their abilities to make healthcare decisions based on what’s best for themselves and their families.”

More than 100 people rallied at the state capitol to push for stronger language and protections for those who remain unvaccinated. However, lobbyists for the business community said the way the bill is currently drafted puts business owners in conflict between complying with federal directives or state law.

“It’s a terrible position for businesses to be put in and it doesn’t solve the problem you’re trying to solve,” J.D. Davis, the vice president of public policy for the Iowa Association of Business and Industry, said during public comments in a committee hearing on the bill.

Additionally, Iowa businesses are concerned about increased unemployment costs if thousands of workers become eligible due to refusing the vaccine and getting fired for it. Rep. Bobby Kaufmann (R) defended the bill saying it would help people in his district.

Ironically, Reynolds cut the $300 weekly benefit in June, saying the benefit was stopping people from going back to work.

“Federal pandemic-related unemployment benefit programs initially provided displaced Iowans with crucial assistance when the pandemic began,” Reynolds said in a statement. “But now that our businesses and schools have reopened, these payments are discouraging people from returning to work.