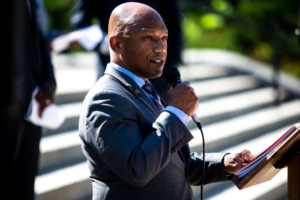 Rep. Ross Wilburn (D-Ames) reported the threatening phone calls and email messages to local police and state investigators after he wrote an opinion piece for the Des Moines Register on Oct. 8, one day before Trump held a rally at the Iowa State Fairgrounds.

In the op-ed, Wilburn, the party chair since January, wrote that the former president “openly attacked the foundations of our democracy,” by continuing to say widespread election fraud cost him the 2020 Presidential Election.

“Donald Trump’s disastrous record speaks for itself: He spent months working to undermine the results of the election and, according to a new report from the U.S. Senate Judiciary Committee, he even pressured the Department of Justice to overturn the 2020 results—right before he incited a violent mob that threatened his own vice president and the lives of lawmakers who were fulfilling their constitutional duty to certify our election,” Wilburn wrote.

“His incompetence killed Americans, gifted corporations and pharmaceutical companies trillions of dollars in tax cuts at the expense of the middle class, and created new incentives to ship jobs away from our country.”

Trump’s bogus election claims were rejected by a litany of judges across the country who tossed or dismissed more than 50 lawsuits. Attorney General Bill Barr and Election Security Director Chris Krebs also supported the election results.

However, Wilburn didn’t stop there. He blasted state Republicans who attended the rally, specifically Sen. Chuck Grassley and Gov. Kim Reynolds, who Wilburn said “surrendered themselves” to Trump.

Wilburn said he received an anonymous voicemail with the lynching threat on Oct 9. The representative received another threat that included a racial slur the next day and a profanity-filled email. Police are investigating the threats, according to the Register.

Both Grassley and Reynolds as well as other state Republicans denounced the threats Wilburn received on Twitter.

Trump has significant support in Iowa, winning the state in both 2016 and 2020. Iowa is also one of the Whitest states in the U.S. as just 4% of its residents are Black.