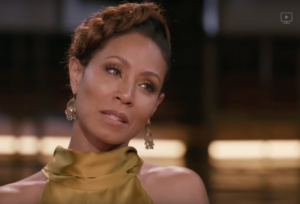 Jada Pinkett Smith is back in the hot seat thanks to her latest revelations on Red Table Talk.

In the newest episode released on Wednesday, actress Gwyneth Paltrow was the guest but Jada is still the one that took center stage with her comments. Smith shared the difficulties about being comfortable enough to open up to her husband about her sexual needs, saying she wants him to already know the expectations. But fans took her comments about intimacy issues as a subliminal jab at her marriage with Will Smith.

Pinkett Smith went on to explain how challenging it was for her and Smith to navigate intimacy in their marriage and understand each other’s likes and dislikes.

“I mean, the thing Will and I talk about a lot is the journey. We started in this at a very young age, you know, 22 years old,” she said. “That’s why the accountability part really hit for me because I think you expect your partner to know [what you need], especially when it comes to sex. It’s like, ‘Well if you love me, you should know. If you love me, you should read my mind.’ That’s a huge pitfall!”

It was clear that Smith was a wife sharing with a friend that sometimes there’s some problems between a man and woman when it comes to understanding wants behind closed doors.

However, while transparent, many took Smith’s oversharing the wrong way and brought up her past “entanglement” episode that aired last year and revealed Jada’s side relations with singer August Alsina. Even though Smith’s conversation was well meaning and supposed to be a teachable moment, Twitter users wasted no time tearing into Smith for seemingly “embarrassing” her famous husband once again.

Jada : ” I wonder how I can embarrass this man this month ” pic.twitter.com/3UkOtlpjXD

“No one: Jada: ”I wonder how I can embarrass this man this month,” one user tweeted with a meme mashup of Jada’s face on rapper Future’s body.

“Why is that our business?” another user asked as captured by Yahoo. “Why she be playing with Will like this?”

Once Pinkett Smith realized she was a trending topic again, she used the opportunity to further promote her show and set the record straight about her marriage to Will.

“Only because I got time today. Stop making up headlines. Watch the @RedTableTalk
I did with @GwynethPaltrow for yourselves. Will and I have NEVER had an issue in the bedroom. Thank you,” she tweeted.

Only because I got time today.
Stop making up headlines.
Watch the @RedTableTalk I did with @GwynethPaltrow for yourselves.
Will and I have NEVER had an issue in the bedroom. Thank you❣️https://t.co/wBpqSTTaGi

Now let Jada and Will entangle in peace.