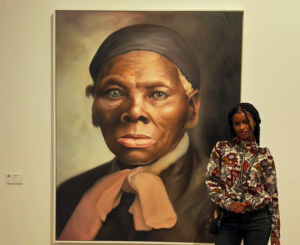 Jade Yasmeen, a painter based in Los Angeles, debuted the first-ever hyperrealistic portrait of Harriet Tubman at the Aku World exhibit during Art Basel in Miami.

In a post on Instagram, Yasmeen shared a photo of her standing next to the 74×60 colored painting and why she chose to honor Tubman.

“I chose Harriet as a way to commemorate the past,” she wrote. “Our ancestry is so rich and deserves to be preserved. That’s my goal as an artist. To continue the legacy of those that came before myself and others. This is a moment in time I’ll never forget.”

The portrait of Tubman, entitled “The Pain Below,” was accompanied by another piece by Yasmeen—a painting of Mae Jemison, the first Black woman to travel to space.

Yasmeen shared a photo of herself next to the large painting on Instagram, along with a message about the trailblazer.

“Let’s not forget about Mae..,” she shared. “I’ve always looked up to Mae Jemison as a little girl because I recognized that she pushed the status quo. The first African-American woman in space! on the first multicultural crew as well. These icons deserve their flowers. Without them we wouldn’t know how limitless we are. Under an extreme time crunch I was able to include her into this show as well. And rightfully so.”

Yasmeen’s talent started at a young age, watching her parents paint and draw at their home in Tampa, Florida, Dutchess International Magazine reported.

“I first discovered my creativity when I was about 5 yrs of age— I was the queen of making ‘messes’ on the walls of our house growing up. Drew on all the mail and my older siblings’ homework,” Yasmeen recalled. “My family couldn’t even stay mad at me because the doodles were pretty fire!”

In 2015, Yasmeen took a leap of faith and decided to pursue her artistry professionally. At the time, she was two years into earning a college degree in Elementary Education.

“We have the power to make anything a reality,” she said. “Anyone who hones in on their innate ability to dream for something beyond their reach is capable of achieving it. It’s possible if we just muster the courage to create it.”