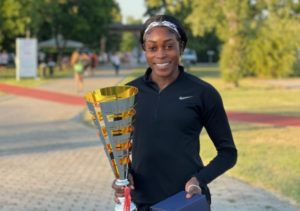 On Saturday, Thompson-Herah captured gold at the Tokyo Summer Games. The 29-year-old track star clocked in at 10.61 seconds, breaking Florence Griffith-Joyner’s mark of 10.62 from the 1988 Seoul Olympics.

“Behind this 10.6 was a lot of nerves, and I said: ‘You can do this, you’ve been here before, just execute,’” said Thompson-Herah, The Athletic reported.

Teahna Daniels was the only American sprinter to make the finals. She finished seventh with a time of 11.02.

Many fans believed that U.S. sprinter Sha’Carri Richardson would have been a top competitor at the Tokyo Olympics. Last month, the 21-year-old was suspended after she tested positive for marijuana. Her absence from the Olympic Games provided an opportunity for Jamaica to sweep the 100 meter race.

Elaine Thompson-Hera Is Making History at the Olympic Games

Thompson-Herah claimed her victory by pointing before she reached the finish line.

“I think I could have gone faster if I wasn’t pointing and celebrating, really,” Thompson-Herah said. “But to show you that there’s more in store. Hopefully one day I can unleash that time.”

“Two months ago, probably a month and a half, I didn’t think I’d be here today,” said Thompson-Herah. “I held my composure. I believed in myself.”

Thompson-Herah sprinted to the finish line even with an Achilles injury. She worked through her previous pain to land a spot at the Tokyo Olympics. Thompson-Herah trained for the moment and wasn’t going to allow anything to slow her down. Now, Thompson Herah is gearing up for her next historic race.

Just a lil girl from BANANA GROUND who liked to run. Believe In your dreams work hard and have faith in God…ETH pic.twitter.com/UrR7UuGZGO