A cluster of wood-clad buildings surround a central courtyard at this Minnesota residence by US firm Salmela Architect that was designed for clients who formerly lived in Japan.

The project, called Fifty-Acre Wood, is located in Stillwater – a historic town located along the St Croix River, just beyond Minneapolis. The house rests on a fifty-acre (20-hectare) parcel, the majority of which the clients granted to the Minnesota Land Trust for permanent conservation.

Situated near a waterfall, the property features an oak forest and farm fields that are being reseeded with native grasses. The area supports a range of wildlife, including black bears, foxes, sandhill cranes and blue herons.

The owners are a married couple – Yuko and Paul – who met and lived in Japan before moving to Minnesota with their two young sons. Paul grew up exploring the St Croix River Valley and wanted his kids to have a similar experience.

In contrast to Paul’s upbringing, Yuko was raised in the dense Japanese city of Fukuoka, and initially, she felt uncertain about living in a wide-open landscape.

“Her wishes were for a home that felt protected, with the inclusion of familiar cultural references in this unfamiliar setting,” said Salmela Architect, a Minnesota firm known for designing homes in a regional modernist style.

The architects conceived a series of buildings that are organised around a central courtyard. The design draws upon two references: a cluster of shed-roof agricultural buildings and a Japanese courtyard house with sheltered, exterior walkways.

The main dwelling consists of two pavilions that form an L-shape and are joined by a glazed passageway. Nearby are a detached guesthouse, a garage and a multipurpose building.

“Each of the five structures is positioned according to function, solar orientation and relationship to specific features of the landscape,” the firm said.

Facades are clad in cedar, and roofs are covered with standing-seam metal. Interior finishes include slate tiles, quartz countertops and ceilings sheathed in pale-toned basswood.

In the main dwelling, there is a clear separation between public and private spaces.

One pavilion encompasses a semi-open kitchen, dining area and living room. It sits on an east-west axis and looks upon a gently rolling field.

“South-facing, floor-to-ceiling windows create a sense of interior-exterior continuity, which is reinforced by horizontal wood slats on both the exterior soffit and interior ceiling,” the team said.

“This Japanese architectural reference helps softens the acoustics of the hard surfaces within the wide-open room.” 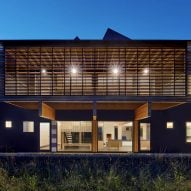 In the kitchen, the team provided views in all directions. A large, northern window delivers sight lines of the home’s courtyard, entry path and driveway, offering a sense of security.

The home lacks a traditional foyer. Instead, one enters through a threshold composed of “symmetrical blade walls” that lie between the kitchen and a mudroom.

“While the clients were initially hesitant about the atypical arrival sequence, they have expressed how comfortable it has been to welcome people into their home without the typical awkwardness associated with a formal foyer,” the team said.

The home’s other pavilion, which holds bedrooms, runs from north to south and hugs the edge of a forest.

“The three bedrooms and two ofuro – shower and tub rooms – look out into the oak forest, which filters warm morning light through its leaves, signaling the start of the day,” the studio said.

The sleeping areas are arrayed along a corridor that doubles as a workspace.

“It remains shaded throughout the workday, creating an ideal glare-free environment until the low evening sun signals dinner time,” the firm said.

Throughout the residence, the team incorporated a number of elements to help reduce energy consumption. These include operable windows, a hydronic in-floor heating system, an air-to-air heat exchanger and a high level of insulation.

“Six-foot-deep eaves and a south-facing orientation enable an optimal passive solar strategy that maximises heat gain in the winter while entirely blocking the mid-summer sun,” the team added.

The home also features three skylight boxes that open and close, enabling hot air to escape. At night, the boxes are illuminated with electric lights.

Beyond the main home, the team created a guesthouse to the west, which provides a level of separation and privacy for overnight visitors, including Yuko’s parents from Japan.

To the north is a two-stall garage and the “barn”, which is a multipurpose space for playtime and storage. The buildings are accessed by paved walkways that surround the courtyard.

“Exterior walkways ring the interior courtyard that is seeded with native vegetation – a microcosm of and counterpoint to the larger landscape restoration project,” the team said.

Other projects by Salmela Architect include a home for a physicist and eye doctor that is meant to resemble a “scientific instrument with multiple viewing apertures” and a solar-powered house that was created for an architecture professor.

The photography is by Corey Gaffer.