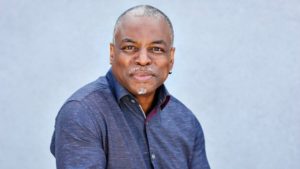 So, it appears Jeopardy! game show execs were playing a real game with LeVar Burton’s emotions.

According to TMZ, a source inside the production team revealed that Burton was never truly in the running as an actual host of the popular game show as a permanent replacement for the late Alex Trebek.

The outlet goes on to share that while Sony Studios executives “loved” the legendary Reading Rainbow and Roots icon, they actually didn’t think he was a “right fit.” They instead talked with Burton about other possible projects they still hope he will sign on for.

We think it’s safe to say that Burton’s appearance was only to appease Black folks and his large beloved following.

Burton served as a fill-in Jeopardy! host the week of July 26, but the icon didn’t make the cut and instead network officials bypassed Burton and a host of others to officially name the show’s executive producer, Mike Richards, as host and Blossom and The Big Bang Theory actress Mayim Bialik as guest-host.

This caused a major uproar among the Jeopardy! faithful and among Burton’s legion of fans.

But since God don’t like ugly, Richards ended up stepping down as host after he got called out over his past sexist comments about women, Jews, and poor people.

While many on social media petitioned to have Burton serve as the new host, somehow Richards who was also the show’s executive producer, hired himself, was selected to fill the spot. But not too long after Richards was announced as the new host did critics dig into his past and unearth some of his old insensitive comments.

Burton’s contributions to Black culture are undeniable. In 1977, he brought Kunta Kinte to life in Alex Haley’s miniseries, Roots, and he never looked back. He later became known for promoting children’s literacy as Reading Rainbow’s host and executive producer. Then, Burton showcased his acting skills in Star Trek: The Next Generation as Lt. Cmdr. Junior Grade Geordi La Forge. Burton has appealed to a variety of audiences and has gained industry respect over the years.