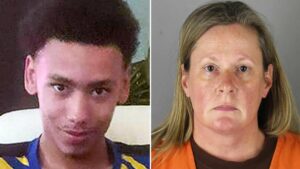 Jurors will hear opening statements Wednesday in the trial of former Minnesota Police officer Kim Potter, who shot and killed Daunte Wright, believing she was firing her taser.

For the second time in state history, the proceeding will be live-streamed. The first time a court proceeding was live-streamed in the state was the trial of Derek Chauvin, who was convicted of killing George Floyd.

According to USA Today, 12 jurors and two alternates will hear evidence in the case. The jurors are split evenly regarding gender, but when it comes to race, nine are white, two are Asian, and one is Black. The alternates are one woman and one man, both white.

Prosecutors will argue Potter, 48, a Brooklyn Centre police officer, committed first and second-degree manslaughter in the death of Wright, a 20-year-old Black man. Prosecutors say Potter recklessly handled her firearm, pulling it and firing it thinking it was her taser, and caused Wright’s death by “culpable negligence,” according to the complaint.

Potter’s attorneys say the shooting was an “accidental and mistaken discharge,” and that Potter immediately expressed “remorse” for the incident.

The former officer potentially faces 25 years in prison and a $50,000 fine for both charges.

Potter and another officer stopped Wright on April 11 due to expired plates and an air freshener hanging from the rearview mirror. The officers ran Wright’s name, discovered an outstanding warrant, and attempted to arrest him.

Wright initially got out of his car and turned his back to the officers to cuff him but quickly turned back around and got into his car.

Potter then yelled out, “I’ll tase you,” then pulled out her service weapon and yelled, “Taser,” three times before shooting Wright in his chest. Potter quickly realized her mistake and began screaming expletives saying she grabbed the wrong gun.

While Potter was screaming, Wright sped off and crashed into another vehicle. Wright died at the scene, and a medical examiner later found Wright died by homicide from the gunshot wound.

The shooting sparked days of protests in Minnesota and across the country. Unlike the Derek Chauvin trial, which included security barriers and national guard members guarding the court, multiple reports say the security for Potter’s trial is much more relaxed.