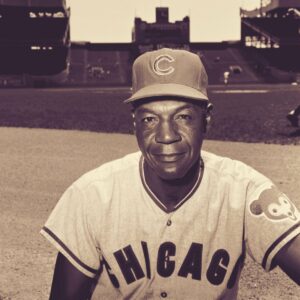 As a player in the Negro American League, where he played for 10 seasons, O’Neil was mainly with the Kansas City Monarchs. During his time on the field, he was named to three All-Star Games, according to KSHB.

O’Neill served as a scout for the Chicago Cubs following his career as a baseball player. He was later named the first Black coach in Major League Baseball by the team. His list of accomplishments doesn’t stop there—he helped found the Negro Leagues Baseball Museum in Kansas City, Missouri.

In 2008, the National Baseball Hall of Fame and Museum honored O’Neil with the Buck O’Neil Lifetime Achievement Award and a permanent, life-size bronze statue. Recipients of the award receive a miniature version of the statue, which sits in the Negro League Baseball Museum.

“The Board of Directors of the National Baseball Hall of and Museum is thrilled to honor Buck O’Neil as the first recipient of this award, named after him,” Jane Forbes Clark, chairman of the National Baseball Hall of Fame and Museum, said in a press release during the announcement of the namesake award. “Buck touched every facet of baseball, and his impact was among the greatest the game has ever known. The Board recognizes this impact Buck had on millions of people, as he used baseball to teach lessons of life, love, and respect. His contributions to the game go well beyond the playing field. This award will recognize future recipients who display the spirit Buck showed every day of his life.”

To be eligible for the Hall of Fame election, candidates needed to receive 75% of the ballots cast by the Early Baseball Era Committee—O’Neil received 81.3%. His name was on 13 of the 16 ballots cast.