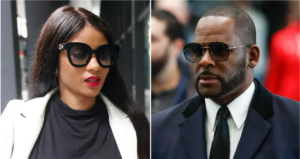 Now that R. Kelly has been convicted of all charges brought against him in his recent trial, the chances of him being a free man anytime soon are next to nothing, especially with two upcoming trials.

However, according to TMZ, the parents of one of his girlfriends, Joycelyn Savage, say they still can’t reach their daughter because Kelly still controls her from behind bars.

Timothy and Jonjelyn Savage said they have been trying to reach Joycelyn and the only way they can do so is through Kelly’s camp. The Savages say they have had recent deaths in the family, a grandfather,  a grandmother and a family member who died last week from cancer. They’re received no response from their daughter.

Two girlfriends of the jailed singer previously defended Kelly and spoke out against his alleged abuses. One of them, Azriel Clary, after his conviction, opened up in a television interview with Gayle King on CBS Mornings, and retracted her earlier claims defending him.

In March 2019, Clary and Savage denied the accusations that were lodged against the singer. But during her second appearance with King, Clary finally admitted that she was coerced into lying for Kelly. Clary also testified at his racketeering and sex trafficking trial using a pseudonym. Clary recalled being involved with Kelly when she was 17 and said he sexually and physically abused her and forced her to get an abortion.

Savage, according to her family, is still sticking beside Kelly. The family believes  Kelly has a hold on her from his prison cell. The concerned parents have been trying to reconnect with Joycelyn since the end of the trial in September after the embattled songwriter was found guilty of all charges in his federal sex crimes trial.