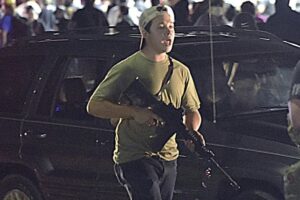 A Wisconsin judge has ruled that the word “victim” cannot be used to describe the two Black Lives Matter protesters killed by Kyle Rittenhouse when his trial starts next week.

According to ABC 7 in Chicago, Judge Bruce Schroeder announced his decision during a last minute pre-trial hearing on Monday to determine what evidence would be admitted during the trial. Schroeder explained that he felt the word “victim” was loaded and would not be allowing the term “alleged victim” either. He will, however, allow language that might describe the activities protesters may have been engaged prior to the shooting.

“If more than one of them were engaged in arson, rioting, looting, I’m not going to tell the defense you can’t call them that,” the judge said.

Rittenhouse, an Illinois native, is accused of traveling across state lines with an AR-15 when he was 17 to patrol the streets of Kenosha, WI, following the police shooting of Jacob Blake. According to witnesses, after being confronted by protestors who were worried about the weapon he was carrying, Rittenhouse opened fire on three separate occasions. He killed Joseph Rosenbaum and Anthony Huber before leaving Gaige Grosskreutz with a severed bicep.

Assistant District Attorney Thomas Binger requested that the judge prevent the defense from entering a video that shows police officers talking to Rittenhouse ahead of the shootings, thanking him and tossing him a bottle of water. Binger’s concern about the video is that it shifts the focus from the defendant and onto how law enforcement should have handled the situation.

“If the jury is being told, if the defendant is walking down the sidewalk and doing what he claims he was hired to do, and police say, ‘Good thing you’re here, ‘is that something influencing the defendant and emboldening him in his behavior? That would be an argument for relevance,” the judge said.

Rittenhouse’s fate will ultimately be decided by a jury, which has yet to be selected.