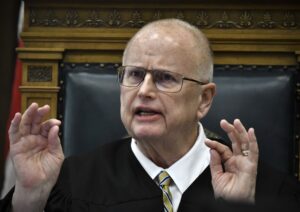 Wisconsin Judge Bruce Schroeder dismissed what was considered one of the stronger counts against Kyle Rittenhouse, who shot two people during a protest last year.

The charge, illegal possession of a dangerous weapon by a person under 18, is a misdemeanor punishable by up to nine months in prison. No one disputes Rittenhouse’s age of 17 at the time of the incident, but according to NBC News, Schroeder cited an exception within the law dealing with Rittenhouse’s age and the length of the weapon’s barrel in dismissing the count.

Prosecutors believed the charge was a slam dunk because there was no argument Rittenhouse was under 18 and in possession of a gun. However, for the statute to apply, the teen would’ve had to also violate a hunting regulation that only applied to people under 17.

Rittenhouse still faces five other charges from the incident, including attempted intentional homicide.  Rittenhouse shot three men that night, Anthony Huber and Joseph Rosenbaum, who were killed, and Gaige Grosskreutz, volunteering at the protest as an EMT and shot in the right bicep.

On Monday, Assistant District Attorney Thomas Binger called Rittenhouse a gunman with no “honor or legal authority” to kill two men, challenging his claim of self-defense.

“So consider, for example, whether or not it’s heroic or honorable to provoke and shoot unarmed people,” the prosecutor said during closing arguments. “They enjoy the thrill of going around and telling people what to do, without the courage or the honor to back it up and without the legal authority to do so.”

Both Huber and Rosenbaum were unarmed when Rittenhouse shot them, but Grosskreutz was moving toward Rittenhouse with a pistol in his hands when the teen shot him.

The defense, meanwhile, has argued the teen was defending himself the night of a chaotic protest. Rittenhouse took the stand late last week in his own defense, insisting he feared for his life in each shooting and crying (despite the fact no tears came out of his eyes).

The trial has gained nationwide attention, and Wisconsin Gov. Tony Evers has put 500 national guard troops on standby if local law enforcement needs assistance with crowd control after the verdict is announced.

In October, Schroeder refused to allow prosecutors to call Huber and Rosenbaum victims, explaining that he felt the word “victim” was loaded and would not be allowing the term “alleged victim” either.

Black Men Teach Obtains $200,000 Grant From Bank of America To Help With Its Mission

OJ Simpson Gets Rejected By White Woman While Trying to Kiss Her, Black Twitter Responds