Call of Duty Season 5 continues to roll along with some substantial additional content updates and announcements, with most landing next week on September 9. However, the biggest is clearly a new operator skin that lets players live the dream of becoming Judge Dredd and dispensing some justice on the enemy.

It is important to keep in mind what is going on within Activision Blizzard regarding ongoing allegations about the work culture. The ongoing lawsuit from the California Department of Fair Employment and Housing (DFEH) against the company is over-reported toxic workplace culture. The bulk of the suit focuses on “violations of the state’s civil rights and equal pay laws,” specifically regarding the treatment of women and other marginalized groups. To learn more about the proceedings thus far, including details listed in the lawsuit against Activision Blizzard, please check out our previous coverage here.

Joining the revered ranks of the Saw puppet, Rambo, and John McLane, Judge Dredd is on the way as a skin for operator Beck. In addition to a traditional skin that turns you into the law, there’s also a comic-strip version that lets you show off in a black-and-white cel-shaded style. And before you ask, yes, there are some associated weapon blueprints, complete with some custom looks and finishing moves. So yeah, not one but two Judge Dredd skin variants to dive into in Season 5 Reloaded. So what else is coming? Lots. 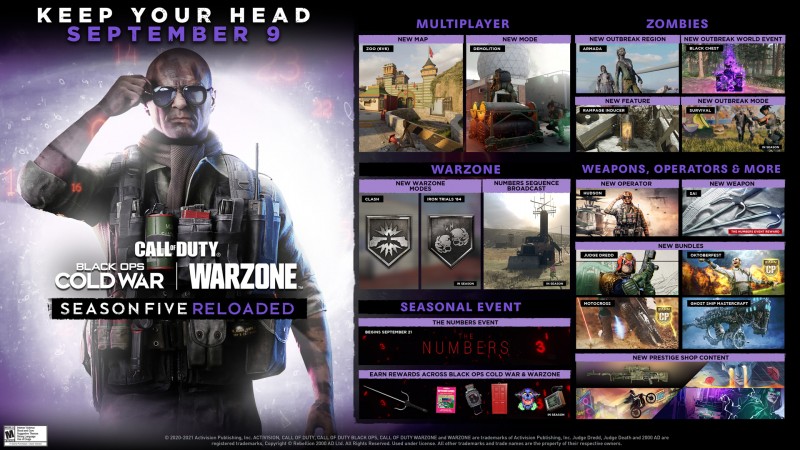 Popular Call of Duty character Hudson is also back as an operator! Woo. The Zoo map returns to Call of Duty, complete with animal exhibits, park space, the monorail, and the gift shop. Everyone wants to go to the gift store, right? To that end, a Zoo 24/7 playlist is hitting so that you can play Zoo all day, every day. Demolition mode rolls out here as well, a chaotic bomb mode with a pair of explosive sites.

Like Zombies? Outbreak gets another region to explore with Armada. That’s right, take the battle to the boat! Located in the North Atlantic Ocean, this picturesque water site is full of new zombie adventures, including an all-new World Event. Speaking of World Events, a mysterious Black Chest is now available across Outbreak regions. This mysterious chest hides… Well, mysteries. Let us know what’s in that thing once you find a few!

Warzone is 50v50 combat again if you want to dive into Clash. This mode offers giant freaking teams going at it in a battle to 500 points with unlimited respawns. If that doesn’t strike your fancy, perhaps the Iron Trials ‘84 mode will be more to your taste. This mode offers a different ruleset compared to standard Warzone, with bigger health pools changing the time-to-kill, changed Gulag loadouts, and other alterations that make it a vastly different drop than the standard Zone we all know.

For a full rundown of everything hitting on September 9 with Season 5 Reloaded, head to the official site here.