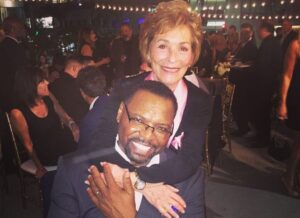 Judge Judy Sheindlin’s longtime bailiff, Petri Hawkins Byrd, is not done speaking out after being left out of Judge Judy‘s new show on IMDB-TV.

This time around, Hawkins is sharing the hurt he felt when he wasn’t able to present the judge with her Lifetime Achievement Award at the 2019 Daytime Emmys. Comedian Amy Poehler ended up presenting Sheindlin with her accolade.

Meanwhile, Byrd sat 15 or 20 rows back from the stage at the award’s show while the judge sat five or six rows back with her executive producer Randy Douthit.

While presenting the award, Poehler even made a comical reference to Byrd, saying, “I wish Byrd your bailiff could hand you this award the way he hands you photos in court, not making eye contact with the queen he has sworn to protect.”

Sheindlin released a statement saying Poehler had asked to present her with the award. But Byrd claims that when he bumped into the Saturday Night  Live alum after the award show, Poehler expressed confusion about why she was chosen to present over the bailiff.

The latest revelation comes one month after Byrd revealed that he wasn’t asked to return to Sheindlin’s court in her newest TV show, Judy Justice.

“My assumption is if you were going on to do something else, that you were at least going to ask me if I wanted to have the opportunity to audition for the role,” Byrd told Entertainment Weekly.

Now, after switching up from her signature short haircut to the ponytail, Sheindlin is apparently acting brand new when it comes to her yearslong work relationship with Byrd.

“I’ve never slighted her — I’ve always thought of her as a friend. And she’s said it before that we’re friends,” Byrd said. “I’m like, then I guess I’d have to ask you to define your definition of friend. It might be a little different from mine.”