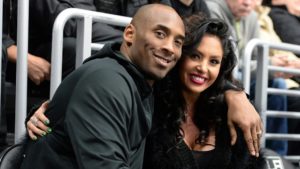 After asking that Kobe Bryant’s widow, Vanessa Bryant, take a psychiatric exam as part of her lawsuit against Los Angeles County, a federal judge denied the request.

According to The Associated Press, Los Angeles County attempted to have Bryant and others submit to psychiatric evaluations to determine if those who are testifying in the case suffered emotional distress over photos of the crash scene and bodies at the site of Kobe and their daughter, Gigi’s death.

Bryant is suing because photos were taken and shared by county sheriff’s deputies and firefighters.

Last year, attorneys for Vanessa Bryant filed a wrongful-death lawsuit against the company that operated the helicopter that caused the deaths of her husband, 13-year-old daughter, and seven other passengers. Bryant’s complaint, filed in Los Angeles County Superior Court, is against Island Express Helicopters, Island Express Holding Corp., and the pilot’s estate, Ara Zobayan.

The wrongful death lawsuit stated that the pilot was negligent by flying in foggy and cloudy conditions on Jan. 26, and he should have aborted the flight.

“Defendant Island Express Helicopters’ breach of its duty and negligence caused the injuries and damages complained of herein and Plaintiffs’ deceased, Kobe Bryant, was killed as a direct result of the negligent conduct of Zobayan for which Defendant Island Express Helicopters is vicariously liable in all respects,” the lawsuit obtained by The Los Angeles Times reads.

Attorneys for the county argued that since Bryant had not viewed the actual pictures and they weren’t shared publicly, they wanted to determine whether she genuinely suffered emotional distress. They wanted to require Bryant and other family members of the people who perished in the helicopter crash, including the children, to undergo psychiatric evaluations as independent medical examinations.

Kobe Bryant played his entire 20-year NBA career with the Los Angeles Lakers. He was a five-time NBA champion, a two-time Finals MVP, and the league’s most valuable player in 2008. Bryant made the All-Star team 18 times and was the youngest player to reach 30,000 points during his career. Bryant retired from the NBA in 2016, scoring an NBA-season-high 60 points in his final game.

The 41-year-old basketball legend died in a helicopter crash in Calabasas, California, along with his 13-year-old daughter, Gianna, and seven other people on Jan. 26, 2020.

Super Smash Bros. Ultimate: Masahiro Sakurai Not Thinking About Sequel, But Won’t Rule One Out