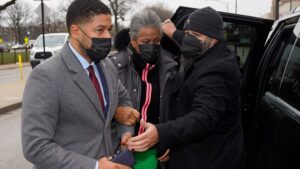 Jussie Smollett’s defense attorney rested his case Tuesday after aggressively questioning Detective Michael Theis about how a reporter was able to find evidence in the case that Chicago PD had missed.

Smollett, who stands accused of conspiring with brothers Abimbola and Olabinjo Osundairo to fake his infamous January 2019 attack, is the only one currently facing charges. The brothers, at least one of which is scheduled to testify, previously told the police that they had been paid $3,500 to stage the attack.

Smollett and attorney Nenye Uche are now claiming that the actor was the victim of a homophobic hate crime at the hands of the brothers.

The former Empire star initially told authorities that he had been the victim of a racially motivated attack at the hands of two white men.

As he questioned Theis on Tuesday, the New York Post reports Uche brought up a piece of evidence that was only admitted into the case more than a week after the attack. The evidence—a hot sauce bottle that smelled like bleach—was recovered by a Post journalist on Feb. 7, 2019.

When she delivered the hot sauce bottle to the police, Gabrielle Fonrouge says she was yelled at, with Chicago PD officers asking if she was trying to do their job.

“This was an investigation you were taking seriously, correct?” Uche asked after confirming that authorities believed the bottle had been used to contain bleach. “The journalist found the bottle because nobody looked for it!”

When the attorney brought up Fonrouge’s allegations of being scolded by his team, prosecutors objected to the line of questioning, at which point the defense rested its case.

According to the Chicago Sun-Times, ahead of the heated exchange, Theis’ testimony included transcripts of text messages Smollett sent to Abimbola Osundairo ahead of his attack and after the brothers had been arrested.

Smollett was charged with felony disorderly conduct, a class 4 felony that carries a prison sentence of up to three years. However, if convicted, the actor will more than likely be placed on probation and ordered to complete community service, experts have said.