Paris studio K Architectures has created a permanent home for the Domaine de Bayssan Theatre near Béziers, France, which was informed by circus tents.

Built on the Domaine de Bayssan estate near the town of Béziers in southern France, the permanent theatre replaced a circus tent that was erected on the site in 2006.

K Architectures aimed to replicate this “circus architecture” with permanent structures for the theatre.

“The recent history of the place guided us,” the studio told Dezeen. “A set of canvas tents had occupied the margins of the site for 10 years.”

“We were able to appreciate that this ephemeral and playful architecture integrated perfectly into the history,” it continued.

“Its bohemian and whimsical spirit enchanted the estate. We have simply tried to reproduce its appearance and its soul through a permanent architecture.”

The complex consists of three rounded venues that are each wrapped in distinctive timber cladding designed to resemble the canvas forms of circus tents.

“The volume of the envelope was sculpted to evoke the folds of stretched canvases,” said the studio.

“The complex geometry borrowed from the world of stretched canvas capitals was very difficult to adapt to our more conventional frames.”

At the centre of the site, the smallest structure is a circular building that contains the theatre’s main foyer along with a restaurant and bookshop. Directly attached to this is the larger “big top”, which contains a 925-seat, flexible theatre space.

The final building in the trio encloses an open-air amphitheatre that can accommodate 1,440 spectators with 965 seated. 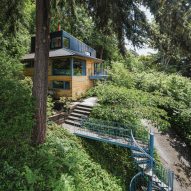 According to the studio, the material for each building was chosen to suit their usage.

“The three buildings required very different technical specifications,” said the studio. “The central idea of the project was to find the shapes and materials most compatible with the place.”

“The theater called for very significant overloads for its framework so metal was used for reasons of economy of material as well as to reduce the influence of the works to facilitate the scenographic installations,” said the studio.

“The same choices were made for the amphitheater, which had even more stringent requirements,” the studio continued.

“For vertical walls, acoustic requirements have placed concrete as the best compromise. We would have preferred massive stone, but the timeframe for the operation was too short to allow it.”

The restaurant building, described by the studio as the cabaret, was constructed with a timber frame.

“As for the cabaret, we were able to give pride of place to wood,” said the studio. “Its structure, cladding and interior lining are made of wood.”

“Placed in the center of the general figure of the project, its appearance of a 100 per cent wooden tent showcases all the symbolism of this architecture,” it added.

Recent theatres featured on Dezeen include Haworth Tompkins’ restoration of London’s Theatre Royal Drury Lane and a library and theatre informed by the shape of a “blue whale” in China designed by Open Architecture.

The photography is by Sophie Oddo unless stated otherwise.

How to Make the Transition to Remote Work