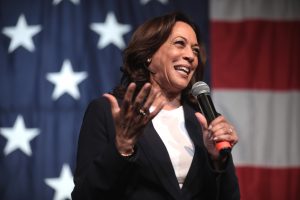 Vice President Kamala Harris said Thursday the Biden administration will work with its allies to protect women and children, as the Taliban takeover of Afghanistan continues.

“There’s no question that any of us who are paying attention are concerned about that issue in Afghanistan,” Harris told reporters.

The vice president made the statement on the last day of her trip to Southeast Asia to help forge partnerships in the region and refocus American foreign policy, which deteriorated during the Trump administration. The trip follows one she took to Central America, visiting Mexico and Guatemala earlier this summer, to discuss the causes of migration and the southern border.

Women in Afghanistan fear a return to Islamic law, where women have almost no freedoms, cannot attend school, and could potentially face a public execution. Taliban spokesperson Zabihullah Mujahid vowed last week that women’s rights would be established and respected. However, advocates on the ground in Kabul say that’s just lip service as women in provinces the Taliban has already taken back have been the target of beatings and killings.

According to CNN, the Taliban has told women to stay home from work because their soldiers are not trained to respect women and their lives could be in danger.

The Biden administration’s struggle to meet the Taliban’s August 31 deadline to leave Afghanistan has taken over a trip that was supposed to be focused on public health, supply chain issues, and strengthening economic partnerships.

However, in both Hanoi and Singapore, Harris has been bombarded with questions concerning the withdrawal, human rights in Afghanistan,and the fates of those who helped the U.S. military during the war.

According to the New York Times, Harris avoided questions about whether Americans are safer today than they were before the withdrawal. Instead, she focused on the administration’s evacuation effort, saying it’s its singular focus at the moment.

The withdrawal grew even more dramatic Thursday morning with two explosions near Kabul Airport, throwing even more chaos and drama to the situation.

Harris is also using the trip to forge partnerships on climate change, cybersecurity, and the COVID-19 pandemic. She also offered to send aircraft carriers and a Coast Guard cutter to Vietnam, Malaysia, and the Philippines. All three countries have accused China of building and fortifying islands in the South China Sea and dispatching ships to intimidate their militaries and fishers.