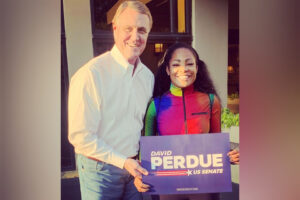 Trevian Kutti, a Chicago-based publicist with ties to Kanye West and R. Kelly has been accused of trying to intimidate a 62-year-old at the center of former President Trump‘s claims of voter fraud in Georgia.

According to Reuters, Ruby Freeman and her daughter Wandrea “Shaye” Moss had been receiving threats of violence after the Trump re-election campaign claimed that during their time as temporary 2020 election workers, the women had counted invalid ballots at the Mercedes-Benz Stadium where Atlanta votes were being tallied. Fulton County and Georgia state officials were quickly able to confirm that the ballots in questions were in fact valid.

Kutti appeared at Freeman’s home in an Atlanta suburb about a month after the threats started. She said she had been sent by a “high-profile individual” to convince Freeman to confess to the the voter fraud allegations to avoid going to jail. After Freeman called local authorities to her home to make sure she would be safe while talking to Kutti, a suggestion was made that the women continue their discussion at a local police station.

In body cam footage obtained by Reuters, Kutti, who told authorities she was a crisis manager, can be heard continuing to affirm that Freeman was in danger.

“I cannot say what specifically will take place,” Kutti says in the video. “I just know that it will disrupt your freedom and the freedom of one or more of your family members. You are a loose end for a party that needs to tidy up.”

The woman then proceeded to call a man named Harrison Ford and asking the police officer who was in the room at the time to leave. At that point, Freeman says the Kutti and Ford continued to try to intimidate her into a confession for a crime she didn’t commit.

The day after Kutti’s visit, Freeman says she got a call from the FBI to tell her they believed she was not safe at her house. On Jan. 6, the very next day, a mob of Trump supporters gathered outside the house while Freeman and her family were gone.

In response to the Reuters article, Kutti, who is still linked to Ye in at least one professional online profile, admitted that she had spoken to Freeman but that the article didn’t reveal all of the facts of the situation.