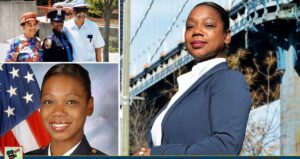 Keechant Sewell, currently the Nassau County Chief of Detectives, will be New York City’s first Black woman to lead the nation’s largest police force with more than 52,000 members. Her new appointment is set to start in January 2022.

Mayor-elect Eric Adams has long said he would appoint a woman to the post. After launching a nationwide search, Sewell was among dozens of female executives interviewed by Adams’ team. The former NYPD captain reportedly favored Sewell as his pick for NYPD commissioner for months when the search began. Now, Sewell will be the first woman to take charge of the department in its 176 years and only the third Black police commissioner in the city’s history.

“I’m very humbled to even be considered for this, and it’s an extraordinary opportunity. And I take it very seriously, the historic nature of this,” Sewell told The New York Post in an exclusive interview Tuesday, just a couple of weeks before she becomes the city’s 45th top cop.

Sewell has worked in law enforcement for 25 years. “Keechant Sewell is a proven crime fighter with the experience and emotional intelligence to deliver both the safety New Yorkers need and the justice they deserve,” Adams told The Post.

Sewell will assume her post’s responsibilities while crimes exponentially rise in the city due to gun violence. The Queens native said she will make a “full assessment” of what works and doesn’t work as it relates to policing and crimes. In addition, she looks forward to coordinating “aggressive meetings scheduled both internally with the police department and the community.”

As stated in Adams’ campaign, “Living in a high-crime community and experiencing gun violence creates trauma that impacts a youth’s ability to perform in school and achieve in life. We will supply adequate services that address trauma and allow for healing, reducing the risk of incarceration, teenage pregnancy, and homelessness.”

This historic moment for Sewell drives confidence in her ability to lead a force of 35,000 uniformed officers and nearly 18,000 civilian workers.