The new museum building, announced in 2016 to coincide with the author’s 211th anniversary, is tucked behind the yellow buildings of the fairytale author’s birthplace, which has housed the H C Andersen House museum since 1908.

A timber-framed entrance that mimics the gabled houses of Odense’s old town leads through into the lush 5,600-square-metre site of the museum, which had a soft opening at the end of June.

It was designed to not just tell the history of Andersen’s life and works, but to embody their sense of “puzzlement, imagination and magical adventure.”

Loosely inspired by Andersen’s story The Tinderbox, in which a tree reveals an underground world, three wooden pavilions housing a cafe, children’s studio and entrance foyer above-ground lead to a network of immersive subterranean display spaces.

“The idea behind the architectural design resembled Andersen’s method, where a small world suddenly expands to a bigger universe,” architect Kengo Kuma said.

In these underground spaces, the architecture is combined with a “complete artistic experience” of sound, light and visuals to immerse visitors in the worlds of Andersen’s tales through a series of interactive exhibits.

“[The fairytales] are what everyone knows…the idea is not to retell the stories, but rather to communicate their familiarity and inspire further readings of Andersen,” head of Odense City Museums Torben Grøngaard Jeppesen added. 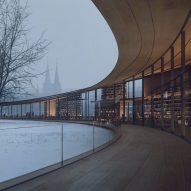 The landscaping, developed in collaboration with Danish landscape architects MASU Planning, is defined by a series of curved hedges that trace the outline of the exhibition spaces below, connected by a network of paths dotted with trees and sculptures.

Glimpses into the underground exhibition spaces are provided by a sunken, tree-filled courtyard in the garden’s centre and a glass pool in the gardens, described by the practice as “portals from the real world to the fairytale world.”

The pavilion structures, built with a frame of spruce and clad with a grid of thin larch beams, are designed to both echo the structure of Andersen’s half-timbered childhood home in Odense and allow the structures to blend in with the garden.

“The architectural structure is reduced to the programs that require natural light – their volumes above ground are minimised to the scale of small pavilions floating among the hedges, trees and green in the garden,” Kengo Kuma & Associates told Dezeen.

Internally, the timber structure has been left exposed, giving each pavilion a ceiling of radial beams intended to evoke the feeling of being beneath a tree canopy. Externally, their scooped roofs are topped with plants to create green roofs.

In contrast, the concrete of the subterranean structure has been left largely exposed, with skylights and clerestory-level windows giving views back up to the gardens above and creating contrasting areas of light and dark in the exhibition spaces.

Photography is by Rasmus Hjortshøj.