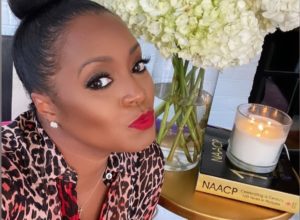 Emmy-nominated actress Keshia Knight Pulliam will share her entrepreneurship experience with students at HBCU Clark Atlanta University. The newly-married actress has partnered with Now and Later® candy to launch the #RecognizetheCHEW Class in Session Series.

“I’m excited to partner with Now and Later,” Knight Pulliam told The Root. “The ‘Chew’ stands for ‘Champion, Hustle, Empower, and Win’. It’s an awesome opportunity to bring light to historically Black colleges and universities, but also to support them with the $10,000 financial grant toward starting a scholarship.”

She adds, “[Terrence J.] is going to Howard University. I’m going to Clark Atlanta University. The classes that we’re doing will be live-streamed so that everyone will have the opportunity to view them… It’s just important to be there and to share your story … Because so often we only share the highlight reel. [This gives us] the opportunity to tell students that the successful people aren’t the ones that have been knocked down, but the ones who keep getting up.”

Now and Later is teaming up with Clark Atlanta University’s Mass Media Arts program to share the power of entrepreneurship. The company is connecting successful celebrity entrepreneurs with the next generation of leaders to expose them to the behind the scenes hustle.

“It’s a pleasure to support the incredible impact these institutions play in fostering some of the nation’s most influential leaders,” Alnese Thomas, Brand Manager, Laffy Taffy & Now and Later, said in a statement.

Clark Atlanta University was one of the first recipients of a $10,000 financial grant and celebrity-led entrepreneurship class.

“Gifts like this truly help our MMA students to complete their journey of becoming the communications industry’s next top leaders,” Gary Yates, Associate Professor and Interim Department Chair, said in a statement.

Knight Pulliam is an HBCU graduate of Spelman College. In 2001, she earned a bachelor of arts in sociology and a concentration in film. Her claim to fame is playing the childhood role of Rudy Huxtable on “The Cosby Show.”

Knight Pulliam also has some venture capital experience under her belt. In 2019, she partnered with Arian Simone to launch a venture capital fund called “Fearless Fund” for Black women entrepreneurs. They invested $5 million to support startups owned by women of color.

“Only 2% of Venture Capital Investors are African American & less than 1% are women,” Knight Pulliam wrote on Instagram in August 2019. “We decided to be a part of the solution by investing in our community!! I am so excited to announce that @Ariansimone & I have started The Fearless Fund… A fund for us by us!! Our mission is to bridge the gap in venture capital funding for women of color founders building scalable, growth aggressive companies.”

From Entertainment to Education

Now, Knight Pulliam is taking her experience to the classroom. In her virtual class, she plans to spark conversations that help students go beyond theory.

“It’s going to be like very much a fireside chat,” she told The Root. “It’s going to be conversational where they also have the opportunity to ask questions. What you can expect is who I am. It’s sharing my unique perspective and doing it from a space of optimism because that’s who I am. […] It’s really about tapping into your joys to find your purpose. And when you find your passion, the money will come.”

Knight Pulliam looks forward to pouring her insights into the next generation of leaders.

“I look forward to partnering with Now and Later on this program and sharing my personal and professional experience with the #RecognizeTheChew Class in Session students,” Pulliam said in a press release. “This next generation of HBCU leaders are resilient. I am honored to provide any helpful nuggets to help fuel their entrepreneurial passions.”