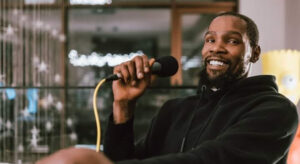 We are seeing more businesspeople entering the cannabis game, and now you can count in Brooklyn Nets’ star player Kevin Durant.

Weedmaps, a leading technology platform for people and businesses who purchase and engage in cannabis, recently announced that they have entered into a multi-year agreement with Kevin Durant, his investment company, Thirty Five Ventures, and his media company, Boardroom.

With this partnership, Durant and Weedmaps aim to deconstruct further the negative stereotypes associated with cannabis. It also anticipates elevating the conversation around cannabis’s potential for athlete wellness and recovery.

BREAKING: We’ve teamed up with Kevin Durant, @35Ventures & @boardroom to shatter the stigma within cannabis and sports ??@KDTrey5 & @richkleiman sat down with our CEO @chrisbeals on their “Out of Office” podcast to discuss what’s planned.

“Now more than ever, there is so much opportunity for growth in the cannabis industry as well as the removal of any remaining stigmas around its use,” said Kevin Durant, two-time NBA champion and president of Thirty Five Ventures, in a written statement. “As the technology leader in the industry, Weedmaps has consistently been at the forefront of change over the last decade. In partnering with Boardroom and Thirty Five Ventures, they’ve shown an even bigger commitment to innovation.”

Weedmaps has become an official sponsor of Thirty Five Ventures’ sports business media network, Boardroom. Boardroom will also collaborate with Weedmaps to produce an original content series, slated for debut in 2022. The agreement will also produce an “Out of Office” podcast, development and distribution of original content, co-branded collaborations and events, exclusive merchandise, and more.

“As the largest technology provider in the sector, we are serious about our responsibility to lead the national discussion around cannabis and the need for cannabis regulations to be updated across the board,” said Chris Beals, CEO of Weedmaps. “This partnership with Kevin Durant, Rich Kleiman, and the team at Thirty Five Ventures is a pivotal step forward in our ongoing efforts to break down stigmas surrounding cannabis, especially in the sports industry.”

D.C. Police Officer Shoots and Kills A Black Man Who Was Asleep in Vehicle Footage Reveals