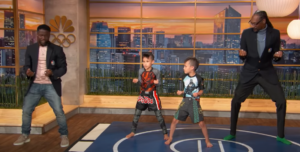 Kevin Hart and Snoop Dogg took their hilarious and much-talked-about post-Olympics coverage to adorable new heights by learning martial arts from a pair of kid trainers.

As part of their Tokyo Olympics-based show, Olympic Highlights with Kevin Hart and Snoop Dogg, the superstar duo got schooled on martial arts by 9-year-old twins, Cinema Blend reports.

After recapping a few of the Olympic games from the day and getting a surprise appearance from comedian Rob Riggle, the Soul Plane co-stars were welcomed by the talented “twinjas” Oliver and Jonathan Ho.

The twin brothers taught the standup comic and rap icon how to properly defend themselves during a martial arts fight. The jiujitsu and wrestling specialists explained their backgrounds in the sport and gave a shout-out to martial arts icon Bruce Lee.

After putting on a show with a mini spar off, the tiny martial artists guided Hart and Snoop as they taught them roundhouse kicks, fight stances, and how to properly hold a horse stance without looking constipated. The comical segment highlighted the Ho brother’s training skills and gave Hart and Snoop the perfect opportunity to slip in jokes and one-liners.

The Ho brothers are highly trained in the art form by their father, Steven Ho, who spent years working as a fight choreographer, trainer, and stuntman in Hollywood. Some of their dad’s most notable work includes performing stunts in two Teenage Mutant Ninja Turtles sequels that came after the 1990 live-action film.

He also worked on box office hits like Blade, two Pirates of the Caribbean films, The Walking Dead, and NCIS: Los Angeles, among many more.