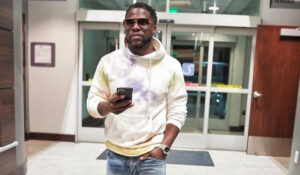 Actor/Comedian Kevin Hart is finally ready to “move on” from his dramatic 2017 sex tape scandal after his former friend Jonathan “J.T.” Jackson got his extortion charges dismissed.

Hart took to Instagram on Wednesday to address the scandal.

“Look, it’s no secret that my life has had its share of ups and downs,” he said. “It definitely has. Not proud of the downs at all, but of course, that’s life, things happen — it’s our job to adjust when they do.”

Hart goes on to explain that his former friend was recently found “not guilty” of the extortion he was accused of and he’s actually relieved because he’s ready to “move on.”

“You know they kind of put a fork in the road between he and I, and that relationship was lost,” Hart said. “But I’m glad that now not only I can finally speak on it, but I can say I’m happy that that chapter of my life is over. I’m happy that we are able to put a period on that sentence, and I am excited to get back to life as we once knew it.”

Back in 2017, Jackson was accused of attempting to extort Hart after the comedian was recorded having sex with a woman who was not his pregnant wife Eniko Hart. In 2018, Jackson was arrested and charged with attempted extortion, attempted concealing and selling stolen property, unauthorized use of personal ID, and identity theft, TMZ reports.

The first three charges were dropped in 2019 due to insufficient evidence and now the final charge of identity theft has also been tossed out leaving Jackson to walk away as a free man.

In the end, Hart’s little Las Vegas rendezvous only got him publicly embarrassed, put a strain on his marriage at the time, and lost him a friend. Good thing he’s moving on.