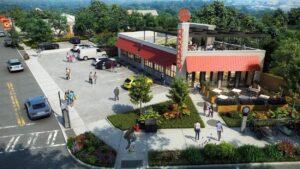 Rappers Killer Mike and T.I. have officially requested all the necessary permits to begin work on the renovation of an Atlanta culinary and community staple, Bankhead Seafood.

The two announced in 2019 that they would be partnering to resurrect the restaurant, which went under in 2018 after having been in business for 50 years, WSB reports. Both artist said that for them, this business venture represents yet another opportunity to invest in a historically Black Atlanta neighborhood.

But they each also have personal connections to the project.

“It’s been a part of my life as long as I’ve been on earth,” says Mike. “If you’re writing a show or a book about Michael Render and his family, (Bankhead Seafood) would definitely be one of the characters.”

T.I., born Clifford Harris, grew up not too far from the restaurant’s location on Atlanta’s west side.

When Mike and T.I. purchased Bankhead Seafood, they acquired the restaurant’s trademarked name, it’s original location, as well as all of its recipes. Mike said that his aunt and grandmother’s biscuit recipes and T.I.’s sweet potato pie may be added to the restaurant’s offerings as well.

The Atlanta natives kicked off their revitalization of the brand with an event in 2020, where they unveiled both their new Bankhead Seafood food truck – which has been in operation since April of last year – and plans for a two-story, 130-seat brick and mortar.

According to Eater, the original plan was to open the restaurant in Spring 2021, but that plan was derailed by COVID. A new opening date has not been announced.

In addition to restoring the original Bankhead Seafood, Mike, T.I. and their partner, real estate developer Noel Khalil have tapped restaurateur Delia Champion as a consultant to help them expand the brand to other physical sites. Champion is the founder of popular Atlanta brunch chain The Flying Biscuit.

“If Bankhead Seafood (which Ms. Harden held onto for 50 years successfully on that same street,) if we only stayed there, we have failed. It is our job to end up in other communities,” Killer Mike said last year. “Just like Waffle House and Chick-Fil-A were born out of Atlanta, and we’ve seen other restaurants and businesses grow out of here, we can be the next one. We owe it to our community. Our goal is to become a national chain.”

Jodeci Is Back Together Under New Management