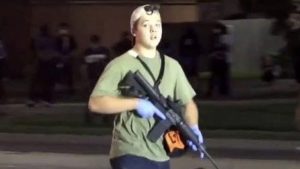 Kyle Rittenhouse, who shot three people, killing two during the protest of a Black man who was shot by police, was found not guilty on all counts.

Jurors in the case deliberated for more than three days and cleared the teen of homicide, attempted homicide and several other charges related to the August 2020 shooting in Kenosha, Wisconsin.

Rittenhouse, who was 17 at the time, shot and killed Joseph Rosenbaum and Anthony Huber and injured Gaige Grosskreutz. Rittenhouse testified that he acted in self-defense, fearing for his life.

During closing arguments Monday, prosecutors said Rittenhouse provoked the shootings when he pointed his assault rifle at Rosenbaum during a protest for Jacob Blake, who was shot in the back by Kenosha police officer Rusten Sheskey in August 2020.

Rittenhouse’s defense attorney Mark Richards said his client acted in self-defense when he shot Rosenbaum arguing the man threatened Rittenhouse, chased him, threw a plastic bag at him and lunged for his gun.

“When my client shot Joseph Rosenbaum, he feared for his life. He feared because of his prior threats, prior statements and the violent acts that had been witnessed by my client,” Richards said.

After the shooting, a group of people began pursuing the teenager, and Rittenhouse testified he shot in self-defense at a man who tried to kick him; fatally shot Anthony Huber, who had hit him with a skateboard; and shot Gaige Grosskreutz, who was armed with a pistol.

More than a dozen videos from the night of August 25, 2020 were shown during the trial, giving a timeline as to what happened before, during and after the shootings. Most of the facts of what happened that night were not debatable– rather, the heart of the trial was the analysis of Rittenhouse’s actions and whether they can be considered “reasonable.”