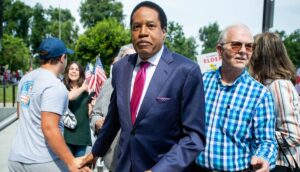 Republican candidate for California governor Larry Elder said in an interview that, if elected, he will implement a plan to house homeless residents developed by former U.S. Secretary of Housing and Urban Development Ben Carson and Los Angeles Mayor Eric Garcetti.

In an interview with the Sacramento Bee, Elder said he would declare a “homeless emergency” and would suspend the California Environmental Quality Act (CEQA) and “unleash” developers and contractors who would build low-cost housing and apartments on government lands.

Elder said that if he cannot solve California’s homelessness problem as governor, he will be a failure.

“If I am elected governor, if I’m lucky enough to be put in that position, and I fail to solve the homeless problem, then I will have been a failure. I’m going to make it one of my top priorities,” Elder said in the interview.

Business Insider reports the California Department of General Services has evaluated more than 44,000 parcels of land and has developed a map showing the best places for affordable housing across the state.

Elder said he wants to identify and solve the issues that cause homelessness, including mental health and substance abuse issues, and build cost-effective housing.

“We have a certain percentage of people who are on the streets who are simply schizophrenic. By that, I mean a danger to themselves or others,” Elder said. “Some percentage—I’m not sure how many—literally have to be removed from the street and put in a mental institution for their own safety and for the safety of the rest of the homeless population.”

During the interview, Elder was asked how long it would take to implement the plan. Elder said he thinks it would only take a matter of months to build cost-effective housing if burdensome rules and regulations were removed.

Ben Carson, who served as the Department of Housing and Urban Development secretary, said the reason the plan was never implemented was that former President Donald Trump lost the 2020 presidential election.